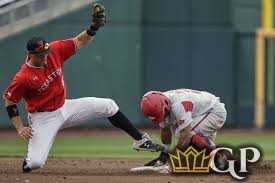 Arkansas was the first team eliminated in Omaha with the Texas Tech Red Raiders handing them a loss after their upset to Florida State on Saturday.

Arkansas was the first team eliminated in Omaha with the Texas Tech Red Raiders handing them a loss after their upset to Florida State on Saturday. After surviving that elimination game, the Red Raiders’ backs are against the wall again as they get set to face the Florida State Seminoles with their postseason lives at stake as well.

It’s been a storied ride so far for the Seminoles, but is this the end of the road or do they have yet another upset up their sleeves? This is the type of excitement that the College World Series is all about and we’re going to see which team has the fortitude to advance as another teams’ season is about to come to a close.

Florida State managed to win it’s first game in Omaha, topping Arkansas, but did so collecting just five hits and scoring a single run. So far, in two games in the College World Series, the Seminoles have collected one runs and eight hits in 18 innings.

After an offensive explosion in the Regionals against Georgia and a nice showing at the dish against LSU in the Super Regionals, it looked like the FSU offense was getting hot at the right time, but they’ve since gone ice cold.

Overall, the true talent level of this offense is somewhere between the epic Regionals performance and the anemic College World Series one, but the offense favors Texas Tech no matter how you slice it.

Texas Tech has a .300 team average with 7.7 runs per game scored while FSU has just three players batting over .300, hitting .270 cumulatively as a team. Texas Tech has one strong one-two punch at the dish with Josh Jung, the eighth overall pick in this year’s MLB draft, and Cameron Warren who leads the Red Raiders with a .353 average and 17 homers. Both have an OPS north of 1.100.

Both FSU and Texas Tech played Michigan and Arkansas before this game. Both beat Arkansas and both lost to Michigan, but in different ways.

FSU relied on pitching to top the Razorbacks while it was the offense that did the job for Texas Tech. The Red Raiders, however, did pitch reasonably well, winning that game 5-4. On the season, the numbers point in Texas Tech’s favor in this one on the mound, too, as the Red Raiders have the better team ERA.

It’s up in the air what FSU will do on the mound on Wednesday. With the days off, Parrish could be given a chance to eat up some innings—either as the starter or the guy coming in after the opener like the Seminoles did in their win over Arkansas.

C.J. Van Eyk is the team’s ace, but he’s out after pitching in the loss on Monday. It’s down to either Parrish or a bullpen game, but whatever works.

J.C. Flowers, Chase Haney, Conor Grady, and Shane Drohan give FSU some other options to pick up innings throughout the game and FSU may be best served to mix and match their way through the game. After all, the Red Raiders do have a deep offense with speed, power, contact and OBP.

Caleb Killian gave the Red Raiders a huge start on Monday, going seven innings of three-run ball in a would-be elimination game. He won’t factor into the game on Wednesday. Instead, the ball will either go Bryce Bonnin or back to Micah Dallas who struggled through three innings in the team’s first game—a loss—in the College World Series.

In that game, Dallas was tagged for four runs—three earned—on six hits and a walk in just three innings, taking the loss in the game against Michigan. Now, he’ll be tasked with putting up a better performance with everything on the line.

Overall this season, Dallas was the team’s best starter. He’s 7-1 overall with a 3.60 ERA, but control is an issue from time to time with a .249 batting average against along with 27 walks and 12 wild pitches in 75 innings.

If he can keep it in check, Dallas should have a better outing, but it’s hardly a comfortable position for Texas Tech. The other options, with Killian having pitched deep in the game Monday, are questionable. Monnin has a 4.42 ERA though he is 6-1 in 59 innings. The rest of the starting options have ERA’s in the upper 4s or worse.

Florida State got a huge win in their College World Series opener against Arkansas, shutting down the Razorbacks 1-0. The pitching came through and there are some good arms on the FSU staff, but don’t look for the Red Raiders to be shutdown so easy.

Texas Tech has a great offense and should be able to tee off for a homer or two and manufacture some more runs as the Seminoles do their best to piece together their pitching staff. Overall, Texas Tech is the deeper team and that will come through here in the third game for each team since the start of play here in Omaha.

Take the Red Raiders over the Seminoles in this elimination game showdown.