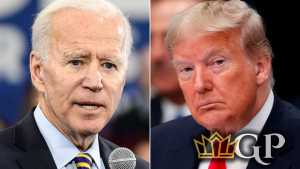 How can a man who hasn’t been out of his basement in more than two months be leading in U.S. Presidential polls? Former Vice President Joe Biden leads President Donald Trump in many of the latest polls. Let's look at the latest election odds.

How can a man who hasn’t been out of his basement in more than two months be leading in U.S. Presidential polls?  Former Vice President Joe Biden leads President Donald Trump in many of the latest polls, despite Biden doing next to nothing in terms of campaigning. I have said in the past that the less people see of Biden the more they like him so it may be the strategy is working. Trump is in the limelight a lot and while some people like him, there is no question he has an abrasive style that turns some people off. Perhaps the bigger question we should ask is why people put any faith at all in polling numbers?  Let’s consider Biden, Trump and the latest polling numbers, plus the latest election odds.

A recent Quinnipiac poll showed Biden’s lead over Trump getting bigger. The poll had Biden leading Trump by 11 points and Trump’s job approval dropped to 42%. The Quinnipiac poll numbers don’t mean much as they have been consistently unreliable in terms of predicting elections.

A Harvard CAPS/Harris poll showed that Biden was leading Trump by a margin of 53% to 47%. The poll had Trump’s approval rating at 47%. “[Trump] continues to lag in the national presidential horse race while Biden’s numbers have shown no change up or down. This race is far from over and both candidates have potentially winning scenarios,” Harvard CAPS/Harris Poll Director Mark Penn said to The Hill recently.

Why is Biden Leading?

The question that is somewhat mystifying is why Biden is leading Trump at all? Biden looks to be one of the most incompetent Presidential candidates in recent memory. Perhaps people remember the old Biden who was somewhat moderate and who appeared intelligent. That Joe Biden is gone, as the current Biden is old, mixed up, easily controlled and hiding in his basement.  The coronavirus and the fallout are the main reason that Biden is leading Trump in many of the polls.  The question is whether or not the voters will blame Trump for the response in the November election.

Trump has gone on the attack against Biden saying that Biden is soft on China and that Biden doesn’t know enough about the economy to lead the U.S. back from the coronavirus. Biden also has had to deal with sexual assault allegations from a former aide, but the media have not covered the story to any great extent, proving once again how corrupt and left-leaning most of the media really is. Trump has been saying that Biden is senile and that Biden is not capable of leading the country. Trump is never one to play it safe and he has continued to attack liberal governors and fake news organizations like CNN and MSNBC.

Next week I’ll look at some interesting props on the board in terms of betting the individual states in the 2020 U.S. Presidential election, but I briefly wanted to let you know that you can bet on who will win states like Michigan, Wisconsin, Florida, Pennsylvania and Arizona at BookMaker. While it is true that Trump is losing in overall polling numbers to Biden, it is also true that Trump is polling pretty well in some of the battleground states that will ultimately determine the 2020 U.S. Presidential election. I think there is some good value in betting some of these state numbers and I’ll get into them in detail next week, so be sure to look for that article.

Check out the latest U.S. Election odds at your favorite online sportsbook.