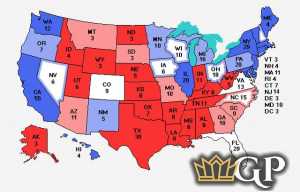 Did you know that not only can you bet on who you think will win the 2020 U.S. Presidential election between Donald Trump and Joe Biden, but that you can also bet on the Electoral College results?

The odds have moved toward Biden in recent weeks and he is now listed as a -170 favorite. The latest polling numbers have Biden as a big favorite, but people should have learned four years ago that polls mean next to nothing. They mean very little with more than four months remaining until Election Day.  If you are wanting to bet on Trump to be re-elected then now may be the time, as you are getting the best value.

Before we start to analyze the Electoral College numbers we need some background. The Electoral College consists of 538 electors and a candidate needs 270 electoral votes to be elected President. Four years ago it was Trump winning 306 electoral votes and that meant he had a 74 vote margin over Hillary Clinton. Keep that number in mind as you look at the odds. Going back further we see that Barack Obama had winning margins of 192 in 2008 and 206 in 2012. When George W. Bush won in 2004 his margin was just 35. It was even closer in 2000 when he won by just 5 electoral votes.

The current polling numbers would tell you that Biden is going to win and win big, but those same polls said the same thing about Hillary Clinton four years ago and we know how that turned out. Biden is not going to win big, as he is an incompetent candidate. If he does indeed win, it will be close. Trump could also end up winning in a close race or the polls could once again be totally off and Trump could win easily.  Let’s look at the Electoral map and see what could happen and which odds are the best to bet.

I looked at the latest Electoral Map and put every state into a list whether it was leaning or a toss-up.  If the state was considered likely or safe I left it out. The three states that no one really debates as being toss-ups are Florida, Wisconsin and Arizona. There are a number of states leaning Democrat but that are not safe and those are Nevada, Minnesota, Michigan, Pennsylvania and New Hampshire. The states leaning Republican, but not safe are Georgia, Ohio, North Carolina and Iowa. Some people have Texas as just a lean for Republicans but that is ridiculous, as Texas is not voting for Biden.

If we total up the number of delegates for those states we get 151. For Trump to win he has to take Florida, so let’s say he does. Let’s say he also holds on to Iowa, North Carolina and Georgia. That would make the total 229-222 for Trump. That means eight states will decide the election. They are Wisconsin, Arizona, Minnesota, Michigan, Nevada, Pennsylvania, Ohio and New Hampshire. Let’s give New Hampshire, Nevada and Wisconsin to Biden and Ohio to Trump. It is now 247-242 for Trump. If we split the two big states and give Pennsylvania to Trump and Michigan to Biden then it is 267 to 258 for Trump. If Arizona goes to Biden then it is 269 to 267 for Biden with those two split districts in Nebraska and Maine that are considered toss-ups. If they both go to Trump then the race is tied 269-269. Wouldn’t that be just what would happen in one of the most screwed up years in U.S. history? If it does end in a tie the race goes to the House of Representatives, but it not what you think, as it is not based on the total number of representatives. Each state gets one vote and in that scenario it is very likely Trump would win.

What does all of this mean in terms of what we should bet?  If we think the race is going to be very close or even tied, then betting each party to win by 0-9 is the way to go. We get 23-1 on the GOP and 18.5-1 on the Democrats.  If the polls are totally wrong and Trump wins just as he did a year ago then you could bet on the GOP winning by 60-99, but I just don’t see enough value in doing that.