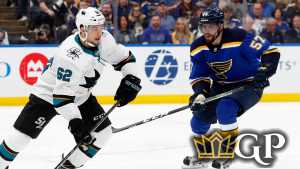 The St. Louis Blues were part of the National Hockey League’s historic “Great Expansion” of 1967. Playing in the West Division comprised of the six new teams the Blues made the Stanley Cup Final...

The St. Louis Blues were part of the National Hockey League’s historic “Great Expansion” of 1967. Playing in the West Division comprised of the six new teams the Blues made the Stanley Cup Final in each of their first three seasons. Sure, they were swept in four games each time but it was still a landmark achievement. However, they have never made it back since their 1970 game four loss to the Boston Bruins in the Final when Bobby Orr scored his iconic flying goal to clinch the Cup. But St. Louis is on an unexpected run at Top rated sportsbooks. And if they can beat the San Jose Sharks on Tuesday night, they’ll make the Stanley Cup Final.

After falling behind 2-1 in this series the Blues have rallied to score two consecutive wins at Offshore sportsbooks to take a 3-2 series lead into this one. If San Jose wins game six the seventh and deciding game will take place at the Shark Tank on Thursday night.

St. Louis coach Craig Berube has had a remarkable few months. He took over a lackluster and uninspired team from fired head coach Mike Yeo. The Blues had the worst Online sportsbooks record in the entire NHL at New Year’s. They were written off for dead. All Berube did was gamble the season and his job on a rookie goaltender name Jordan Binnington. From that point the Blues became the hottest team on the board and the NHL to make the playoffs and nearly win the Central Division.

But Berube’s best moment came in this series after a painful 4-3 overtime home loss in game three. The Sharks game winning goal came with an illegal hand pass that the four on ice game officials missed. And by rule the play could not be reviewed by video. Blues players and fans were outraged. Sticks were thrown by players and debris was tossed onto the ice by fans at Enterprise Center. Yet at that moment Berube stemmed the tide. He told everyone to get over it and move on to the next game. The Blues have won the two games that followed and can now clinch a berth in the Stanley Cup Final with a win in game six.

Grinding Down the Sharks

San Jose’s world class defenseman Erik Karlsson had less than 11 minutes of ice time in game five and was ineffective when in action. Top Sharks scorer Logan Couture has been shut out the last two games. Evander Kane scored 30 goals in the regular season but has only two in the playoffs.

San Jose has struggled to get the money on the road for quite some time now. The Sharks have paid in only four of their last 12 games on enemy ice. Only two of their last seven away tilts have gone over the total.

By contrast the Blues have been a reliable play at the Enterprise Center. St. Louis has won 11 out of their 16 games on home ice with only two of their last eight home matchups going over the total.

St. Louis has had the long-term edge in their head to head series with the Sharks. The Blues have won eight of their last 14 games with San Jose as only three of those 14 games went over the total. And at the Enterprise Center the Blues have won four of their last six games against the Sharks. Only one of the last six games between these teams at St. Louis have gone over the total.

The Blues have had a remarkable run that should continue on to Boston after this one.