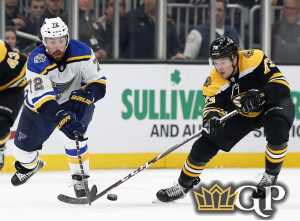 At the onset of the Stanley Cup Final the St. Louis Blues were a pronounced underdog at Top rated sportsbooks against the Boston Bruins.

At the onset of the Stanley Cup Final the St. Louis Blues were a pronounced underdog at Top rated sportsbooks against the Boston Bruins. And after Boston steamrolled to a dominant 4-2 win in game one the gambling dollars flooded towards them. But once again the betting public was caught in an overreaction overlay. The Blues turned the tables with a strong 3-2 overtime win in game two and were clearly the better team for the entire game. With the win the Blues have tied the best of seven series 1-1 and now have home ice advantage.

St. Louis defenseman Carl “Boom Boom” Gunnarsson was the game two hero with the overtime game winning goal. Earlier is the game Gunnarsson hit the goal post and believed that if he got another opportunity he would capitalize. In the break between the third period and overtime Gunnarsson was at the urinal next to head coach Craig Berube. Gunnarsson told Berube that he would get the kill shot if given the chance. Berube put him on the ice and Gunnarsson delivered the goods with the biggest goal in team history.

Boston flexed a dominant pose in game one with a 38-20 shots on goal advantage in their win. After falling behind 2-0 in the first period the Bruins unleashed a relentless barrage in the second period in which they outshot the Blues 18-3 to turn the tide. But in game two the Blues flipped the script with a 37-23 shots on goal advantage. While St. Louis was sloppy and undisciplined in game one, they were almost flawless in game two. On the other hand, the Bruins looked like they were reading their own headlines after the first game win as they were not nearly as sharp for game two.

Anyone that wrote the Blues off for dead was sadly mistaken. St. Louis overcame perilous moments in their first three playoff series against Winnipeg, Dallas, and San Jose to gain the Final. In fact, the Blues have been at their best when facing the most pressure.

Overall this has been an even matchup in recent years. In fact, the Blues and Bruins have split their last eight meetings with four wins apiece. Four of the last six games between these teams have gone under the total. The Blues have had true home ice advantage in their series with Boston. St. Louis has won four out of their last six games at Enterprise Center against Boston with an even three to three split on overs and unders in those six matches.

Born in 1967, game three is the biggest game in the history of the St. Louis Blues. The Enterprise Center crowd will be over the top and should add to the Blues energy.