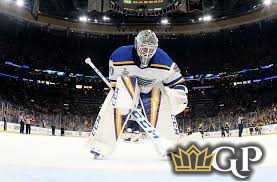 All during the 2018-19 NHL season there was constant banter about the league being all about speed. The days of big and heavy lumbering teams were said to be over. At least until this year’s Stanley Cup Final.

All during the 2018-19 NHL season there was constant banter about the league being all about speed. The days of big and heavy lumbering teams were said to be over. At least until this year’s Stanley Cup Final. Few teams play as big and heavy as the Boston Bruins and St. Louis Blues. Boston has been among the favorites at Top rated sportsbooks to contend for the Final this year. St. Louis has defied all odds by rising from the worst record in the NHL on January 3 to win the Western Conference. Both teams are deep, complete and well coached. And they have the most necessary component of all which is good goaltending.

TD Garden in Boston will host the first two games of the Stanley Cup Final. Game one is set for Monday May 27 with coverage on NBC. Game two is on Wednesday, May 29 with NBCSN handling the broadcast. The series will then shift to Enterprise Center in St. Louis. Game three is on Saturday, June 1 with NBCSN televising the game. Game four set for Monday, June 3 as NBC takes back television coverage for the remainder of the series. If necessary, Game five is at Boston for Thursday, June 6. Sunday, June 9 would be the date for a game six back at St. Louis. And if a seventh game is needed it will be Wednesday, June 12. All games are scheduled to start at 8 p.m. ET

Boston was near death down 3-2 and facing elimination at Toronto in the first round. Since that time, they have won 10 out of 12 games at Offshore sportsbooks. Seven of their last 10 post season games have gone under the total. The Bruins steamrolled the Carolina Hurricanes in four games to win the Eastern Conference title.

St. Louis is coming off a six-game win in the Western Conference Final over the San Jose Sharks after falling behind 2-1. The Blues simply grinded the Sharks down to dust as the series went on. St. Louis has won six of their last eight games with four of their last six going over the total.

The Blues and Bruins split their two games this year with the home team winning each time. Boston took out the Blues 5-2 at TD Garden on January 17. The Blues returned the favor with a 2-1 home win on February 23.

This is an even series with teams that have scoring depth, loaded defensive corps, clutch goal tending and top coaches that own their team’s hearts and minds. In such a situation the dog makes for the better value.