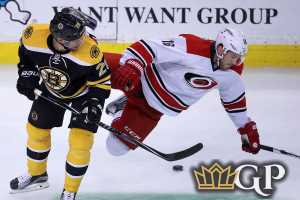 The Eastern Conference Final series may have opened with the Boston Bruins favored over the Carolina Hurricanes at Top rated sportsbooks. But not taken into that equation were the games scheduled at the PNC Arena.

The Eastern Conference Final series may have opened with the Boston Bruins favored over the Carolina Hurricanes at Top rated sportsbooks. But not taken into that equation were the games scheduled at the PNC Arena. Few teams own a better home ice advantage or more passionate fans than the Carolina Hurricanes. That is what happens when you combine a high stakes playoff hockey game with an atmosphere of college basketball and football. Fans tail gate in the parking lot and stand during the games. It’s a distinct environment that has given the Canes a true home ice advantage. An advantage that they must use to the maximum against such a quality opponent such as Boston.

Boston impressed all at Offshore sportsbooks with wins of 5-2 in game one and 6-2 in game two. But now the series shifts to Carolina where the Hurricanes have been unbeatable so far in post season. Game four of this series will be Thursday at Carolina.

Few teams on the NHL board at Online sportsbooks bring better wagering value on the road than the Boston Bruins. For example, the Bruins have won nine of their last 13 games away from home including four of their six post season tilts. Five the B’s last seven road games have gone under the total. However as good as the Bruins have been on the road the Hurricanes have been even better at PNC Arena. Carolina has cashed in the winning ticket in 13 of their last 16 games on home ice. Additionally, the Canes have won all five of their home playoff games. Carolina has gone over the total in three of those five post season games at PNC Arena

Bruins and Canes Head to Head vs. Spread

Recently in this head to head series the Bruins have had the value edge on the board against Carolina with six payouts in the last seven meetings. Only one of the last nine games between these teams have gone under the total. However, at PNC Arena the Hurricanes have won three of their last five games against the Bruins. Only one of those five games went under the total.

One of the keys to Carolina success is that it has been a true team effort that has not been dependent on any one player. It begins with right wing and team captain Justin Williams, who played alongside Canes head coach Rod Brind’Amour on Carolina’s 2006 Stanley Cup championship team. Williams presence and three Stanley Cup rings give him instant credibility with fans. Jacob Slavin has emerged as a top tier defenseman for the Hurricanes. Center Jordan Staal is a trusted mainstay veteran. And left wings Sabastian Aho, Warren Foegele and Teuvo Teravainen have all come up clutch this playoff season. Also looming potentially large is defenseman Dougie Hamilton, who started his career with the Bruins.

The first two games at Boston did not go well for Carolina goaltender Petr Mrazek, who returned from injury after missing the last three game of the second round against the New York Islanders. This could lead to a return between the pipes by backup goalie Curtis McElhinney, who dominated the Islanders wit a .947 save percentage. A Switch to McElhinney would make sense with the season now on the line.

It can be argued that Boston is probably the better team in this matchup. But there is no argument about Carolina’s home ice advantage. When you combine the grit, toughness and character of the Hurricanes with the Caniac crowd at PNC Arena you have a strong betting value.