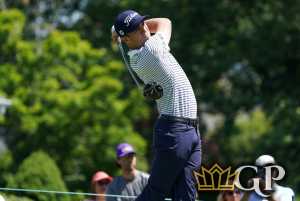 For the first time in memory, the PGA Tour will hold back-to-back events at the same location, as the Workday Charity Open takes place this week, while the Memorial Tournament is scheduled for next week. Both tournaments will be played at Muirfield Village Golf Club. Organizers say that the set up will be different for the two events, but there is only so much you can do to change a course. A solid field is assembled for this event with a number of top ten players in the field. I was a little better with the matchups last week, as I went 3-3 with the Rocket Mortgage Classic, so perhaps I’ll finally get back to the winning ways that were a regular occurrence before the virus mania. Let’s look at this week’s Workday Charity Open matchups and golf picks.

Byeong Hun An -115 vs. Kevin Streelman

If you read my odds preview then you know I like the chances of Morikawa this week. I know that Fowler played better last week, but I am still not sold he has totally figured things out yet. I think Morikawa is going to be in the mix for the win this week and I will take him against Fowler.

There is a big difference in class between these two players. Schauffele is one of the top players in the world, while Hovland is one of the young players hoping to be a great player. I know that Hovland has played pretty well of late, but he is not at the level of Schauffele. I will lay the price and take Schauffele in this matchup.

I avoided going against Spieth after he looked better coming out of the break, but I am going against him again. He still doesn’t seem to have things figured out, as he almost always has at least one bad round. Niemann is usually very consistent, so I will take him in this matchup.

Rose has been excellent at Murifield Village, as he won this event in 2010 and he is second in all-time earnings. He is simply a better player than Fowler right now. I will take Rose in this matchup.

Woodland should thrive on this course with his excellent overall game. Leishman has been pretty good on this course, but right now Woodland is the better player. I will lay the small price and take Woodland in this matchup.