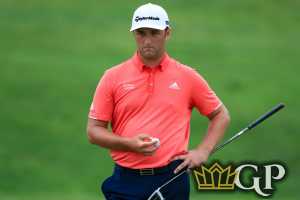 You might not have even thought about it, but Golf’s first major of the year is less than two weeks away. This year the PGA Championship will be the first of just three golf majors and most of the world’s top players are using this week’s WGC FedEx St. Jude Invitational to get ready. The top eight in the latest World Golf Rankings and 45 of the top 50 are in the field. That makes this event the strongest so far this season. Let’s look at this week’s WGC FedEx St. Jude Invitational and golf picks.

This course in Memphis, Tennessee has hosted a PGA Tour event every year since 1958.  It is one of the longest courses on the Tour and it also has a lot of danger, as since 2004, more than 5,000 balls have ended up in the water. While distance off the tee is important, shots gained on approach is a critical stat to look at.

The new World No. 1 is listed as the favorite this week. He took last week off after winning the previous week. I had him as the winner a couple of weeks ago, but I can’t back him at these odds against such a strong field. I like Rahm’s game and he is capable of winning, but there is no value on him at this number.

Webb finished as the runner-up in this event a year ago. He is in the midst of another strong season and this course really suits him well. He is pretty long off the tee and he is also accurate. I give Webb a good chance to be in the mix this week and we get him at odds of more than 20-1.

I was really hoping for 30-1 or more on Schauffele but we take what we can get. Schauffele is a lot closer to playing at a high level than you might think at first glance. He seems to have one bad round in each event. He still has four top 20 finishes in five starts and he usually plays really well against top fields. I have gone with Schauffele in this type of spot before and I am taking him again for this tournament.

Another player who should thrive on a course like this is Matsuyama. He has normally played well in WGC events, including wins in the WGC HSBC Champions in 2016 and the WGC Bridgestone Invitational in 2017. Matsuyama has finished 11th and 6th in two WGC events this season. He ranks in the top five in strokes gained on approach this season. I think he is a solid value play this week.

I am going to throw in one big longshot in here and take Homa. You could see signs of Homa getting close last week. He ranks sixth in Shots Gained: Tee-to-Green and if he could just get his putter going he would win. The field this week is really strong, but Homa looks like a player who is gaining confidence every week. We don’t need to hit many of these bombs to make them worthwhile, as hitting just one at odds of more than 100-1 make the season. I’ll take Homa at big odds this week.