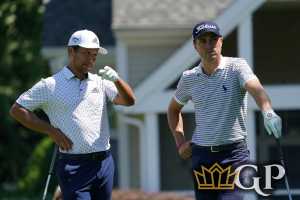 The PGA Tour stays in Ohio this for The Memorial Tournament. Justin Thomas and Bryson DeChambeau are co-favorites at odds of 10-1. I hit another really nice winner last week with Collin Morikawa at odds of 33-1 .Let’s look at this week’s golf picks.

The PGA Tour stays in Ohio this week at Muirfield Village for The Memorial Tournament. Last week it was an excellent finish in the Workday event with Collin Morikawa defeating Justin Thomas in a playoff.  This week the field is smaller, but much tougher, as almost all the world’s top players are in the field. Justin Thomas and Bryson DeChambeau are listed as co-favorites at odds of 10-1. I hit another really nice winner last week with Collin Morikawa at odds of 33-1 and that makes two big winners this season since golf’s return as it was Webb Simpson coming through for us a few weeks ago. Let’s look at this week’s Memorial Tournament and golf picks.

I said last week that I would monitor Thomas, as I knew he would turn things around and be a threat soon. It happened last week, but he still has a few issues to correct and those issues cost him last week in a loss to Morikawa. Even with some putting issues late in the final round, Thomas still nearly won. There is no question that Thomas could fix a couple of things and win this week, but I rarely back favorites.  I know that DeChambeau won a couple of weeks ago and he is the hottest golfer on the PGA Tour, but I am not backing him as a favorite.

Rahm hasn’t been in top form since the return but there are signs he is ready to contend. He shot a 64 on Sunday in the final round of the Workday Charity Open so he comes in with a lot of confidence. It is rare that you can ever get Rahm at odds this high and I’ll back him this week at 20-1.

I don’t take players that often to win in back-to-back weeks, but I think there is value on Morikawa. He played really well down the stretch to catch Justin Thomas last week and it would not surprise me to see him carry over that momentum into this week. Morikawa ranks first on the PGA Tour in strokes gained on approach. I will go with him again at odds of 20-1.

Whenever there is a strong field of players I always give a strong look to Schauffele. He always seems to step up his game when going against the best players in the world. He played well last week and I expect him to be even better this week.

You have to give Berger a look, as he has finished in the top 10 in five straight events. He ranks seventh on the PGA Tour in total strokes gained. He has 32 straight rounds of par or better. I think there is value on Berger at these odds.

I have to admit that I am really surprised that the odds on Woodland are this high. He still doesn’t get the respect he deserves, as he is one of the best players in the world. He has the length and the overall game to win this week and we are getting him at odds of 40-1.

Check out the latest Memorial Tournament odds at the online sportsbook.