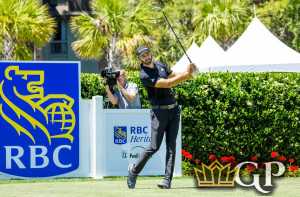 Harbour Town is a par 71 that measures 7,099 yards.  It is very similar to last week’s Colonial layout with tight fairways. Last year the greens were the sixth-hardest to hit at about 60%. It should be noted that the last four winners of this event were first-time winners on the PGA Tour.

Rory was in position to challenge last week heading into the final round and then completely came apart. I don’t know what happened, but Rory is more than capable of turning things around this week and you do get more value on Rory than you did last week.

I was really surprised that Webb struggled last week, but perhaps he just needed a week to get the rust off. He had done well on these types of courses, as he is accurate off the tee and he putts well. He has finished in a tie for 16th or better in each of the past three years in this tournament including a top five finish two years ago.

Hideki did not play last week, so it is hard to know exactly what to expect out of him, but we do know he hits a lot of greens and that is the recipe for success at Harbour Town.

I had Reed on my list last week and I am coming right back with him again this week. He played well last week and he nearly pulled off the win, but an average opening round was just too much to overcome. As I said last week, Reed hits a lot of greens and is a good putter and that puts him in contention.

Grace was in contention last week and Harbour Town is similar to Colonial. He won this event in 2016 so we know he can handle the pressure. I think he has some value at this number.

I was looking for a player who has yet to win on the PGA Tour because the last four winners of this event have been first-time PGA Tour winners. Ancer fits the bill of a player who can win on this course. He hits the ball straight and he hits a lot of greens.

Where did Conners come from? He was in contention last week and he could be in the mix again this week. He is third in greens in regulation on the PGA Tour this season and he is 15th in Shots Gained: Off the Tee. Conners is my big longshot this week.

Check out the latest RBC Heritage odds at the online sportsbook.