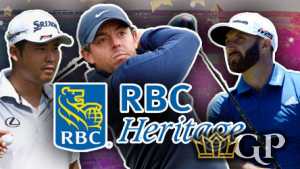 Many of the world's top players are in the field for this week's RBC Heritage. I’ll look to get back to form this week with the RBC Heritage matchups and golf picks. Let's look at RBC Heritage odds and matchup picks.

The PGA Tour made a very successful return last week with Daniel Berger winning an exciting Charles Schwab Challenge. Most of the top players in the world were in the field last week and that is the case again this week for the RBC Heritage. It was a bit of a struggle after the long layoff, as I went 2-3 with the matchups at the Charles Schwab Challenge last week. I’ll look to get back to form this week with the RBC Heritage matchups and golf picks.

Byeong Hun An -125 vs. Rafa Cabrera-Bello

I was surprised last week by both Conners and Watson. I didn’t think Bubba would do well on last week’s course and I don’t see him repeating that success this week. Harbour Town is all about accuracy and big drives don’t do you much good. You might be surprised to see Conners favored, but oddsmakers know what is going on. Conners played well last week and he should continue that strong play again this week. I will lay the price and take Conners in this matchup.

I had a preview of Grace in the RBC Heritage odds article. Grace played well last week and he is accurate off the tee. Finau is not known for his accuracy and I don’t see him doing well this week. I am a little bit surprised that Finau is favored, but I am not complaining. I will take Grace at plus money in this matchup.

I thought Fowler would play better last week, but he never got it going. I am surprised that Hatton is favored in this matchuup, as he normally doesn’t play events like this one. I will take Fowler at the short price in this matchup.

I think DJ is a fade right now and I am irritated that I didn’t go against him last week. I won’t make that mistake this week and in this matchup we get a player in Koepka who should be raring to go.  I will lay the small price and take Koepka in this matchup.

Rory is the top player in the world and he was in contention last week until an inexplicable final round. I know DeChambeau is everyone’s new favorite player, but I am still not sold. The added distance DeChambeau has off the tee won’t do him any good this week and I think he is overvalued. I will take Rory in this matchup.

The bloom may be off of Hovland a little bit. He is not the next great golfer and he may never be that guy. Ancer should thrive on this course with his accuracy, so I will take him at the short price in this matchup.

The RBC Heritage is scheduled for June 18-21. Harbour Town Golf Links will host the event and CBS and Golf Channel will televise it.