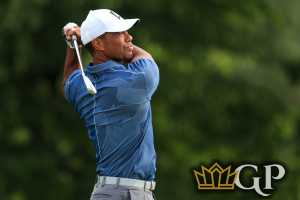 Golf’s first major of 2020 gets underway on Thursday in San Francisco, as the PGA Championship begins. I got back on track and went 4-1 in the matchups last week. Let’s look at this week’s PGA Championship matchups and golf picks.

Golf’s first major of 2020 gets underway on Thursday in San Francisco, as the PGA Championship begins. World No. 1 Justin Thomas is listed as the favorite, but there is a laundry list of players who could win this week. I got back on track last week with the matchups at the WGC FedEx St. Jude Invitational going 4-1, so I’ll look to continue the winning at the PGA ChampionshipVenue: TPC Harding Park

Byeong Hun An -125 vs. Mackenzie Hughes

Matsuyama is ranked second on the PGA Tour in Strokes Gained: Tee-to-Green. He has played far better than has Tiger since the return. It is hard to make a case for Tiger considering he has played just once since the return and he didn’t look that good in that one event. I will lay the price and take Matsuyama.

I am going against Tiger in another matchup and taking Cantlay. There is no doubt that right now Cantlay is the better player. He took some time to get going after the break, but he looks ready for a big effort in San Francisco this week. I will lay the price and take Cantlay.

Fleetwood is another player who took some time to get going after the break, but he looks to be ready to roll. He played well in the final round in Memphis and he has played at TPC Harding Park in the past, as he tied for 5th in 2015 in the match play event. I can’t see any way that Scott can come in and play well this week after not playing in any PGA Tour event since the return. I will lay the small price and take Fleetwood.

Woodland knows how to win a major, as he won the U.S. Open in California last year. He played really well at TPC Harding Park in 2015, as he finished second in the match play event. I just can’t see Harman competing on a course this long, so I will take Woodland in this matchup.

Sergio is one of the best ball strikers in the world and he ranks 15th on the PGA Tour in the last 24 rounds in Shots Gained: Ball Striking. He has finished 35th or better in his last three events. I will take Garcia in this matchup.