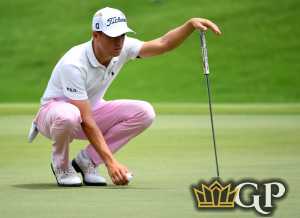 The first major of the season is the PGA Championship, not the Masters, and it gets underway on Thursday in San Francisco. World No. 1 Justin Thomas is listed as the favorite. Let’s look at this week’s PGA Championship and golf picks.

The first major of the season is the PGA Championship, not the Masters, and it gets underway on Thursday in San Francisco. The coronavirus has changed the world as we know it and it changed the PGA Tour schedule, so this year will have just three majors with the PGA Championship first on the schedule followed in September by the U.S. Open and the Masters in November. All of the world’s top players will be in action this week with World No. 1 Justin Thomas and two-time defending champion Brooks Koepka listed as the top two betting choices. Let’s look at this week’s PGA Championship and golf picks.

Harding Park is a par 70 that measures 7,234 yards. The course is up against Lake Merced, but there is only one water hazard, on the 18th hole. Harding Park opened 95 years ago and it has hosted two WGC events and the Presidents Cup in 2009. The course has a lot of trees, narrow fairways and deep rough.

I don’t bet many favorites in golf, but you can make a case for taking Thomas at odds of nearly 10-1. He is playing better than anyone in the world and there is no denying his talent. He won the PGA in 2017 and I think he could play even better than he did a week ago when he won the St. Jude. I don’t know that I will take him because I usually avoid backing favorites in golf, but I am at least thinking about taking him.

If you have followed my picks you know that I like Schauffele. I was hoping that we would get more than 20-1, but oddsmakers like his chances too. Schauffele tied for 6th last week at the St. Jude and if not for one bad hole he could have won the event, as he had a quadruple bogey in the second round. Schauffele has been money in major events, making the cut 10 times in 11 tries with five top 10 finishes. I expect him to contend this week.

Many people thought that Cantlay would come out of the break and play great, but it hasn’t really happened. This could be the week for Cantlay who should thrive on this course. He is accurate off the tee and his overall game is one of the best in the world. We get him at attractive odds of 30-1.

Morikawa is another player who is accurate off the tee and he is already one of the top players in the world at just 23 years old. He ranks third on the PGA Tour in ball striking and he is sixth in tee-to-green. Morikawa won’t be awed by this stage and he could be in the mix.

I have to throw in one more play for the PGA. Fitzpatrick is one of the most accurate players off the tee. We have been seeing a lot more of him lately on the PGA Tour and it could be that this week’s PGA is where he really gets on the main stage. We sure get him at attractive odds of 52-1.

Check out the latest PGA Championship odds at the online sportsbook.