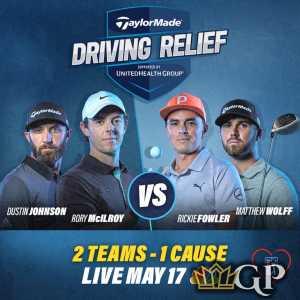 We finally get a little bit of a return to normalcy in terms of golf, as Dustin Johnson and Rory McIlroy take on Rickie Fowler and Matthew Wolff in the TaylorMade Driving Relief 2020 Skins game on Sunday on NBC. Check out the latest golf betting odds .

We finally get a little bit of a return to normalcy in terms of golf, as Dustin Johnson and Rory McIlroy will take on Rickie Fowler and Matthew Wolff in the TaylorMade Driving Relief 2020 Skins game on Sunday on NBC. Sports fans are desperate for any type of live event and the television networks realize as much, so this event will be shown live on NBC, Golf Channel, NBCSN and Sky Sports. It will also be streamed live on PGA Tour Live, GOLFPASSS and GolfChannel.com. The live coverage runs from 2 p.m. to 6 p.m. Eastern Time on Sunday. The team of Johnson and McIlroy are listed as a 2-1 favorite in golf betting odds.

This event will have a “skins game” format which means that teams win a skin if they win the hole. The interesting part of the skins format is that if the hole is tied, the skin rolls over to the next hole and that means there would be two skins on the line for that hole. If there are multiple ties in a row then you would have one hole being worth a lot in terms of the overall event.

This event will take place in Juno Beach, Florida without fans in attendance. The players will be competing for a purse of $4 million that is going to be donated to charities. There has not been any competitive golf action since March 12, so it will be interesting to see how the four players do after such a long layoff.

Johnson and McIlroy have the higher profile, but Johnson didn’t play well earlier this season. On the other hand, McIlroy was in top form before the shutdown. Johnson and McIlroy are two of the longest hitters on the PGA Tour so they will have the advantage off the tee. McIlroy also ranks highly in many PGA Tour statistics this season, including 12th in birdie average.

Fowler is capable of stepping up in big moments and playing well and Wolff is no stranger to pressure. He won the 2019 NCAA individual title at Oklahoma State in May, turned pro just a month later and won his first PGA Tour event in July of last year. He is 11th on the PGA Tour in strokes gained off the tee this season.

There is no question that McIlroy and Johnson should be favored. You might be able to make a case that McIlroy would be favored all by himself against the team of Fowler and Wolff. In his last seven starts, McIlroy has finished tied for 5th or better a total of five times. Johnson hasn’t played at a high level this season, but in this format he doesn’t need to play great, he just needs to help out McIlroy on occasion.

“I’m really excited to team up with Rory and to get back out on the golf course.” Johnson said to the media, “Seminole is a great venue and it will be cool to show it to the world through this event. I’m sure Rickie and Matthew will be ready for us, but hopefully Rory and I can take them and help generate a lot of money and support for charities and those affected most by COVID-19.”

Fowler and Wolff are very good golfers and Wolff has a ton of confidence. The problem for Wolff is that he is just 21-years old and his game simply is not at the level of the other three players yet. Perhaps there will be a day when Wolff can hold his own against players like McIlroy and Johnson, but that doesn’t figure to be on Sunday.

I despise laying big money in anything, but I can’t make a case for taking Fowler and Wolff at plus money. McIlroy is the best player in this field of four and I think his play will be the difference, so I have to lay the price and take the team of McIlroy and Johnson.

Check out the latest golf betting odds at the online sportsbook.