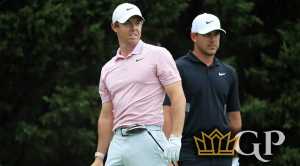 Bet Golf odds at the online sportsbook including those on the Charles Schwab Challenge which begins on June 11. Bet using Bitcoin and Join us!

The PGA Tour is finally back in action with a full event, as the Charles Schwab Challenge gets underway on Thursday. Many of the top players in the world will be in action, including the top five ranked players in the world. Rory McIlroy is listed as the favorite at odds of just under 8-1, with Jon Rahm the second choice at odds of just under 9-1. They are the only two golfers listed at single-digit odds and that means some nice prices on some big name players and longshot odds on some players who can win.  Let’s get back into the swing of things and look at this week’s Charles Schwab Challenge and golf picks.

Colonial is a par 70 that measures 7,209 yards. The course features tight fairways, so accuracy off the tee is a must. There are also a lot of bunkers throughout the course so sand saves are going to be important. Winners in this event are usually known for accuracy, strong mid-iron play and strong putting on bentgrass greens. We will keep that in mind as we make this week’s golf picks.

All other players are listed at odds of +10000 or more or they are part of the field.

One of my favorite players is McIlroy and there are occasions where I will take him as a favorite, but this is not one of them. The field is simply too strong to take a player at odds this low. I also don’t know that the course really suits Rory, as his length is not going to be a big factor and while Rory is a good putter, he is not known as a great putter. I will look elsewhere.

I have to admit that I was hoping for better odds on Webb, but the oddsmakers know what they are doing. Webb hits the ball straight and he is known as a good putter, so there is no reason he can’t contend this week.

When you think of accuracy off the tee, strong mid-iron play and good putting you have to think of Reed. He was playing well before the virus mess and he ranks third on the PGA Tour in Strokes Gained: Putting. I think he has great value at these odds and I would make him my top pick, regardless of the odds.

I know that Rickie rarely wins, but how often do we get him at odds of nearly 40-1? We know that Rickie can putt and he is especially good on bentgrass greens. There won’t be any fans, so Rickie shouldn’t feel as much pressure. I think he is a live longshot this week.

If you see a theme this week then you would be correct, as I am focusing on players who are accurate and can putt. Ancer is a good mid-iron player and he has the ability to get hot with the putter.

I have to throw Kisner in here at these odds. He is accurate off the tee and we know he putts well. We are getting a live longshot at odds of more than 100-1.

Check out the latest Charles Schwab Challenge odds at the online sportsbook.