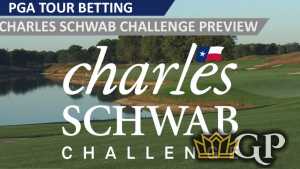 The wait is finally over, as the PGA Tour gets back into action with the Charles Schwab Challenge on Thursday. Most golfers couldn’t wait to get back into action, so almost all of the world’s best players will be in the field. There will be 21 of the top 25 in the FedExCup standings in the field with the top five players in the World Golf Rankings leading the way. Rory McIlroy is listed as the betting favorite at odds of about 8-1.  It has been a while since we had matchups, but overall our picks have done really well over the years.  Let’s see if we can pick right back up where we left off as we consider this week’s Charles Schwab Challenge matchups and golf picks.

I am going against DeChambeau again and taking Simpson in this matchup. Webb tied for 3rd in 2016 in this event and he finished fifth in 2017. Webb has the accuracy and the putting to contend for the win this week and I like him in this matchup.

Reed is one of my top contenders to win this week and this was the best matchup on the board that I could find. Reed is accurate and putts well, while Im missed the cut in his Colonial debut last season. I will take Reed in this matchup.

I have gone against Spieth a lot over the past couple of years and I will continue to do so until he proves me wrong. This is totally a play against Spieth, but Rose is one of the top players in the world, so it is not like we are getting an average golfer in this matchup.

This matchup is more of a price play than anything else. I know Morikawa is one of the “hot” golfers that people like to pick each week, but Na won this tournament last year. Na has actually won two of his last 18 starts and we know he loves Colonial, so why can’t he contend again?

The Charles Schwab Challenge is scheduled for June 11-14. Colonial Country Club will host the event and CBS and Golf Channel will televise it.