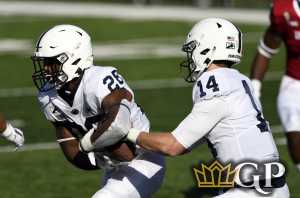 After successive weeks of making donations to our favorite online sportsbook, we got back in the money in Week 8 by producing a solid 4-2 ATS card and cashed a nice moneyline dog along the way. Let's look at Week 9 College Football Picks.

After successive weeks of making donations to our favorite online sportsbook, we got back in the money in Week 8 by producing a solid 4-2 ATS card and cashed a nice moneyline dog along the way. But man did we have to earn that one after the Hoosiers seemingly gave the pointspread cover away in the final minute of regulation only to take it back and then some by forcing overtime and winning the game on a controversial Michael Penix lunge into the end zone pylon. The other loss came on the Iowa State moneyline, but we’ll take it since we were lucky as hell to kick in the backdoor in the game’s final minute. Notre Dame squashed PITT as expected by unleashing an air attack unseen to this point of the season. The other defeat came on the over in the Iowa/Purdue game, but that recommendation was released with the belief PU would have both of its stud pass catchers available for the game. It wasn’t announced till Friday that Rondale Moore would sit it out. That brings me to 15-14 ATS for the season with a couple nice cashes on moneyline dogs. In other words, we’re in the black thus far. Here’s to hoping we remain there with Week 9’s college football picks.

The Heels just missed out on being a part of last week’s recommendations. I did however add them to my personal card and came away extremely satisfied with their performance against an overrated NCST opponent that lucked out the previous week against Duke. As much as I expect Bronco Mendenhall as a coach, the Cavs are simply overmatched in this tilt. While the run game could hold up early against the Heel’s 1-2 punch in the backfield, it’ll only be a matter of time until it wilts. Once that happens, Sam Howell will pick their atrocious secondary (No. 86) to pieces. So long as UNC doesn’t kill itself with turnovers, missed tackles and allowing big plays on busted coverages, it wins this one by 14 or more.

I faded Penn State in Bloomington last week and was thrilled with how the game played out through three quarters. Then all of a sudden, the Nittany Lions exploded by scoring 21 of the game’s final 32 points to close out regulation. Had Devyn Ford simply fallen down at the one-yard line instead of score the touchdown with less than two minutes remaining, they would’ve won the game; say what you will about James Franklin’s poor coaching. Regardless, this is simply too many points for the Buckeyes to be laying in this contest. OSU has questions along its offensive line and secondary. It also gave up a number of yards to QB Adrian Martinez when he tucked the ball and ran last week. Sean Clifford is capable with his legs, and I foresee him picking up a number of first downs that allow for Penn State to sustain drives. It seriously wouldn’t shock me if PSU won this game outright, so a small beer money wager at +370 will be taken into consideration.

I’m so pissed at myself for not backing the Chanticleers last week even after it was announced QB Grayson McCall would miss the game. His absence made me steer clear, but Coastal still had no issues offensively in combining for 382 yards with his replacement Fred Payton completing 15-of-28 passes for 252 yards and 3 TD. Most impressive was the play of the CC defense that held the Eagles No. 13 ranked rushing attack to a total of 119 yards on 37 carries which equated to a paltry 3.2 yard per carry average; well below their seasonal output of 5.3. Though they got West Division leader South Alabama up next week, I don’t foresee any lookahead occurring. The teams been money in the bank and this week should be no different in a revenge spot versus GA State.

I seriously thought this game would open up in the mid-80s. To my and many a college football total bettor’s delight, it surfaced in the upper 70s. The betting markets have moved it to where I thought the number to beat should’ve been, so I have no reservations about jumping in at the current impost. I honestly have no clue how either of these defenses stops one another. Houston’s defense concedes nearly 32 points per game, while UCF over 33. On top of that, their offenses rank No. 28 and No. 1 in total yards respectively. Neither stop unit knows how to defend the pass, and that’s where both offenses flourish. Seriously, the first team to put 50 on the board might win the game. With UCF coming off a debilitating loss at Memphis last week, it might step on the gas even more which would come with welcome arms considering they run a league-high 93.4 plays per game! Houston runs over 76. This will be a track meet that has the scoreboard operators busy throughout.

The only reservation I have about laying the full game spread of 29.5 is that Kalani Sitake has shown a penchant for emptying his bench once the game gets out of reach, and this one is sure to be another runaway winner for the Cougars. So instead of taking the chance, I’ll just hammer the first half spread and look for Heisman Trophy hopeful Zach Wilson and the offense to blitzkrieg a middle of the road Hilltoppers defense that’s yet to run up against an offensive force it will have the displeasure of defending on Saturday night. BYU is vastly underrated at No. 11 entering this tilt, so look for them to hit the ground running and destroy another unworthy opponent as it continues its quest to get the attention of pollsters.