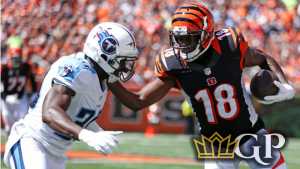 This column is going against the grain and in the NFL, going against the public is normally successful. We went a sizzling 6-1 with the plays in Week 7 to take the record to 22-18 on the season. Let’s look at Week 8 Against the Grain Picks.

Week 8 Against the Grain Picks

The public wants nothing to do with the Falcons who gave away another game last week.  While the public is not backing the Falcons, the wiseguys are. This line has moved toward Atlanta all week. Whenever a three popped up it was immediately taken by the wiseguys and the line went down to 2.5. The line has drifted down even further to the number of 2. I can understand the public backing the Panthers, as all Carolina has to do is win this game and based on how Atlanta gives games away, the Panthers are the logical choice. Carolina has played well for much of this season and they have been efficient on offense with Teddy Bridgewater and the defense has been okay. This play is definitely going against the grain, because the public is all over the Panthers. We’ll take the Falcons plus the points.

The public is backing the Titans to bounce back this week after a tough loss at Pittsburgh last week. The Bengals are not yet a good team, but they have been competitive in nearly every game and Joe Burrow continues to improve. The public likes Tennessee, but this is definitely a letdown spot for Tennessee and there is no question that Cincinnati is a live dog. Tennessee’s defense has not been good this season so the Bengals should be able to score points. In what should be a high scoring game, we’ll go against the public and take the Bengals plus the points.

The public is taking the Steelers plus the points in what is the best matchup of the Week in the NFL for Week 8. The Steelers are the lone unbeaten team in the NFL, but the Ravens are considered the better team and they are at home. Baltimore has just one loss on the season and that came against the defending champion Chiefs, so we know that Baltimore is a top team. Pittsburgh has won all of their games, but they haven’t played a tough schedule. This is a true test for the Steelers and the public thinks they are going to pass. We go against the public and lay the points with the Ravens.

The final play of Week 8 should come as no surprise, as the public wants nothing to do with the Cowboys. Dallas looked sickening last week in a loss to Washington and the public always remembers what they saw last. The Cowboys are decimated by injury and they are not sure that quarterback Andy Dalton will play on Sunday night. The offensive line for Dallas has been so bad that it hasn’t mattered who is at quarterback, as there are no holes to run through and no pass protection. It could get a little better this week, as Zack Martin is expected to return. And it may not matter if Dalton plays or not, as he has been terrible. Rookie Ben DiNucci could end up getting the start on Sunday night and he can’t be any worse than Dalton. He has gotten first team reps all week and will be much better prepared than he was a week ago when he came into the game against Washington with no prep time. The public is all over the Eagles, but how can you trust Philadelphia?  We’ll go against the grain and take the Cowboys plus the points.