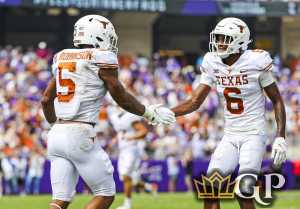 With baseball’s regular season now over, it’s time to turn my attention to the college gridiron in hopes of helping you pad your bankroll over the next few months. Here are my top rated selections for Week 6 of the college football betting season.

With baseball’s regular season now in the rearview mirror, it’s time to turn my attention to the college gridiron in hopes of helping you pad your bankroll over the next few months. Hopefully my college football picks prove to be as lucrative as the baseball bets as it was a very memorable summer for all that followed along. But enough about that, let’s put the woman and children to bed and go hunting for dinner! The following are my top rated selections for Week 6 of the college football betting season.

This is likely going to be a fantastic game to attack the live betting market on with a short favorite paired with a total in the low 60s at a neutral site. OU has been the side to back recently with it winning each of the last three meetings SU and covering twice. While it pains me to state since I have a national championship ticket in hand, Boomer Sooner just hasn’t passed the eye test for me through its first five games. One only has to look at Oklahoma’s performance vs. the betting odds to back that up (1-4 ATS). Save for getting dominated by the Hogs in Arkansas, I’ve come away impressed with what Steve Sarkisian has done with the Horns. Bijan Robinson will be the best player on the field, and he’ll undoubtedly throw a wrench into the Sooners impressive stats defending the run. This should be a back and forth affair the whole way through. Should either snag a double-digit lead, snag the other on the live betting lines and enjoy the free roll!

Ever since I can remember, the Cavs have been a solid defensive team under Bronco Mendenhall’s watch. That however isn’t the case this season with its No. 2 ranked passing attack leading the way for the nation’s No. 7 total and No. 40 ranked scoring offenses. This Brennan Armstrong kid has been nothing short of amazing slinging the pigskin around the yard for nearly 2,000 passing yards and a 14:4 TD/INT ratio through five games. Malik Cunningham is nothing if not a gamer, but he doesn’t have the supporting cast to keep up with the Wahoos. On top of that, he left last week’s game with an unspecified injury. Should he miss or not be 100 percent, Scotty Satterfield is more than likely to absorb his first loss at home in 2021.

I get that Georgia just smacked the ever-living tar out of the Razorbacks and enters this tilt one of the favorites to win the national title with 5-0 SU and 4-1 ATS records in tow. However, this line is super inflated and not giving Auburn the respect Bo Nix and Tank Bigsby so richly deserve. I can’t wait to see how this one plays out in the trenches with Tank hammering the Dawgs stout run defense all game long. I had this game lined closer to -10, so I’m gonna run with the line value according to my numbers and look for the Tigers to give Georgia a challenge similar to the one Clemson offered up in the season opener.

I’ve come away very impressed with the way Big Red has carries itself since dropping an embarrassing 30-22 decision as 6.5-point road favorites at Illinois to kick off the year. Since then, they’ve throttled Fordham and Buffalo, took Oklahoma to the limit in Norman and fell in overtime at Michigan State. Last week, they took their frustrations out on Northwestern burying the Wildcats 56-7 as 11-point chalk. While Michigan’s 38-17 win in Camp Randall is one they can beat their chest about, the Badgers are brutal! Sorry, but a 20-13 win at home against Rutgers just doesn’t pass the eye test for me. Nebraska is the better of these two teams by a country mile. Stop drinking the Maize and Blue Kool-Aid! Michigan shouldn’t be favored to win this game, and that train of thought will be substantiated once the Huskers come up with the biggest win of the Scott Frost era – Slam Your Man!