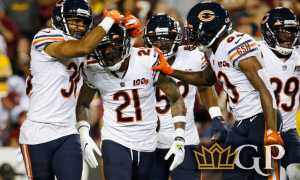 When you bet the NFL, it is easy to go along with the crowd and the popular plays each week. The problem with doing that is that you are not going to consistently make money. There are a number of popular plays each week in the NFL and we are going to be going against those plays. This column is going against the grain and in the NFL, going against the public is normally successful. We have had two good weeks and one losing week, so we can’t complain, as we head into Week 5 with a record of 9-7. It is a weird week coming up, as the public is actually taking some underdogs. Let’s look at Week 5 Against the Grain Picks.

Week 5 Against the Grain Picks

The public has another team they have jumped on this season and that team is Tampa Bay. The Bucs are scoring a lot of points and Tom Brady looks great once again. The Bears did not play well last week and Nick Foles didn’t look like a former Super Bowl winning quarterback. The public always remembers what they saw last and last week it was the Bucs scoring a lot of points with Brady throwing 5 TDs and Nick Foles struggling. We’ll go against the grain and take the Bears plus the points on Thursday night.

The public wants nothing to do with the Falcons and can you blame them? Atlanta is winless on the season and Dan Quinn looks like he will be out of a job sometime soon. Carolina is playing well and the public remembers what they saw last week. It is somewhat rare when we are laying points because usually the public backs favorites, but this is a weird week and the public has some teams they are going against, regardless of the spread. We’ll lay the points with the Falcons.

This is more in line with what the public likes to do. They like to back favorites at home and in this case they get an unbeaten Pittsburgh team against a Philadelphia team that leads the rotten NFC East with a record of 1-2-1. The Eagles looked a little better last week, but Carson Wentz is still struggling and the defense is nothing special. We’ll go against the grain and take the Eagles plus the points.

The Jets are a bad football team, and the public is betting against them every week. In this case the Jets might actually have a chance because Arizona is no longer playing well. Arizona is poorly coached, but they have some offensive talent and that means they will look good one week and struggle the next. It is always hard to take the Jets because they have a coach in Adam Gase who is worse than Kingsbury, but we go against the grain and take the points.

This is a play that surprises me, as I don’t understand why the public is backing Washington. I know the Rams didn’t look good last week in their win, but how can you have any confidence in Washington?  Perhaps if Washington made a quarterback change then you could make a case for taking them, but with Haskins throwing the ball it is hard to like Washington. This is definitely a weird play, but we lay the points and take the Rams.

This is another game where I am surprised the public is so against the favored team. Houston fired Bill O’Brien so you have to think they will play better this week under Romeo Crennel. The Jaguars have played okay at times, but if Houston would play to their talent level then this game wouldn’t be close. The public is backing the Jaguars, so we’ll lay the points and take Houston.