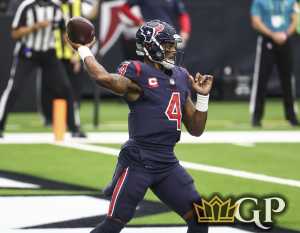 This column is going against the grain and in the NFL, going against the public is normally successful. We went 3-2 with the plays in Week 9 to take the record to 27-22 on the season. Let’s look at Week 10 Against the Grain Picks.

Week 10 Against the Grain Picks

The public is backing the Browns in this game, but I am not really sure why. Cleveland has had their moments this season, but they are not a team you can trust. This is a big game for Cleveland, as they are 5-3, but they are coming off a loss and the AFC is loaded with potential playoff teams. Houston is just 2-6 on the season, but they are coming off a win and there is no question that the Texans have some talent on both sides of the ball. The Texans have Deshaun Watson and he can make plays on offense and they have J.J. Watt who makes plays on defense. The problem for Houston is that they don’t have a lot surrounding Watson and the defense has major holes. The question is whether or not Cleveland can take advantage. Despite the media’s love affair with Baker Mayfield, he is not a franchise quarterback. The Houston defense is bad, and Mayfield has shown he can make plays against bad defenses, but he struggles against quality opposition. The Browns are definitely a public play, so we’ll go against the grain and take the Texans plus the points.

The public is backing Seattle on the road in this game. The Rams are kind of the forgotten team in the NFC, as they still have a winning record at 5-3 and with a win on Sunday, they would tie Seattle for the top spot in the division. One thing we know for sure is that the Rams are going to score a lot of points because the Seattle defense is terrible. I am not sure why the public is so in love with the Rams in this game. Seattle has a good offense, but the Rams defense is not bad and they should be able to slow down Russell Wilson a little bit. This figures to be a high scoring game and it could be that the last team with the ball wins. We’ll go against the public and take the Rams minus the small number.

If you remember what I said last week, then you could have gone 4-1 instead of 3-2 because I didn’t like the 49ers at all. This column is going against the public and there are rare instances where I agree with the public. This is another one of those games. The public is taking the Ravens in this game and I totally agree. The Patriots showed once again last week that they are not a good team. Yes, the Patriots did pull out a win against the Jets, but New England is going nowhere. The New England defense is weak and the offense is nothing more than Cam Newton running around the throwing it to Jakobi Meyers. The Ravens are the far superior team and I am a little surprised this number isn’t higher. This is not the Patriots of the past and head coach Bill Belichik admitted that the team is paying the price for going all-in to win Super Bowls. The Patriots made the right choice, as winning titles is worth having to rebuild. The Patriots are in rebuilding mode, whether they want to admit it or not. I expect New England to get routed on Sunday night, but this column is about going against the public and against the grain and that means taking the Patriots plus the points.