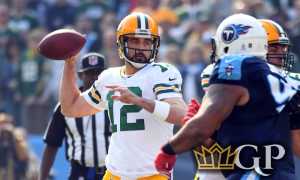 The Tennessee Titans visit the Green Bay Packers on Sunday Night Football on NBC. It is a matchup between high scoring offenses, as the Titans lead the league in scoring at 31.1 points per game, while the Packers are 3rd, averaging 31 points per contest.

The Tennessee Titans visit the Green Bay Packers on Sunday Night Football on NBC. It is a matchup between high scoring offenses, as the Titans lead the league in scoring at 31.1 points per game, while the Packers are 3rd in the league, averaging 31 points per contest. The Titans have the top running back in the league in Derrick Henry, while the Packers have one of the top quarterbacks in the league in Aaron Rodgers. There is little doubt that we should see a shootout on Sunday night. Let’s look at Sunday Night Football and NFL picks.

The Packers have clinched the NFC North and come into this game with a record of 11-3 SU and 8-6 ATS. The Packers are 6-1 SU at home and 4-3 ATS. They have gone over the total seven times and under seven times. They are averaging 31 points per game and giving up 24.2 points per contest.

There are two key matchups to focus on, one for each team. The Titans will look to run the ball with Derrick Henry and control the game and the clock. Henry leads the league in rushing with 1,679 yards, while the Packers are giving up 4.5 yards per carry. The Packers can’t just stack the line and stop the run because the Titans have a great play-action passing game. Quarterback Ryan Tannehill leads the NFL in total passing yards and attempts on play-action passes this season. Tennessee has a Pro Bowl receiver in A.J. Brown who has 881 yards and 10 TDs. The Green Bay defense will have to find a good balance of stopping Henry and yet not giving up big plays to Tannehill.

On the other side of the ball, the Packers have a huge edge. The Tennessee defense simply isn’t very good. They are 29th in the NFL against the pass, giving up 276 yards per contest. Not only is Tennessee poor against the pass, they are terrible in situational defense. The Titans are last in the NFL in third-down percentage defense and they are 30th in red zone touchdown percentage. The Packers are third in the NFL in third downs and first in red zone offense. Aaron Rodgers leads the NFL in passing yards on third down and receiver Davante Adams is first in receiving yards on third down.  Rodgers leads the NFL with 29 red-zone TD passes. The Titans have no chance of stopping Rodgers and the Packers offense on Sunday night.

The Packers are extremely focused on getting the top seed in the NFC and they badly want to play at Lambeau throughout the NFC playoffs. They can’t afford a loss at home to the Titans on Sunday night. This figures to be a high scoring game with both offenses putting up a lot of points, but the Packers have a better defense than Tennessee and they should make a few stops. I’ll lay the points and take Green Bay and also play the game over the total.

Check out the latest Week 16 odds at top online sportsbooks.