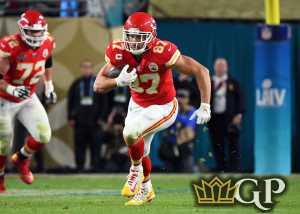 The Kansas City Chiefs begin defense of their Super Bowl title by hosting the Houston Texas on Thursday night in the opener of the 2020 NFL season on NBC. Let's look at Texans vs. Chiefs ATS Picks.

The Kansas City Chiefs begin defense of their Super Bowl title by hosting the Houston Texas on Thursday night in the opener of the 2020 NFL season on NBC. These two teams met in last year’s playoffs and the Chiefs won 51-31, scoring on eight straight possessions. The Texans look to be worse than they were a year ago, while the Chiefs look to be just as good, so this could be another rout.  The Chiefs are listed as 9.5-point favorites with a total of 54. Let’s look at the matchup and NFL picks.

The early line movement has gone toward the Texans, as some of the wiseguys are taking the points. Historically you can make a case for going against the Chiefs, as Super Bowl winners oftentimes struggle the following season, but Kansas City might be different. They have the best quarterback in the league in Patrick Mahomes and Kansas City has been known to start fast. The Chiefs have scored 42, 38 and 40 points in their last three season openers.

"Coach Reid runs a great training camp," said Mahomes to the media, "I think that's a big part of it. He puts us in situations that are really game-like, which I feel like is a huge advantage, especially with no preseason games. I mean he's putting us in these situations every single day. We might not be tackling full, but we're put in situations where we're in third-and-long, third-and-short, trying to figure out ways to go throughout a game and situations that you'll be a part of. So I think that's why we start so fast and we're ready right out of the gate because the training camp coach runs."

The Chiefs look ready to go and there is no question that the addition of running back Clyde Edwards-Helaire is going to make Kansas City’s offense even better. The Chiefs under Andy Reid have started seasons 9-0, 5-0, 5-0 and 4-0. There is no reason to think they are going to struggle early this season.

On the other side, the Texans are simply not as good as they were a year ago. The team pretty much gave away Pro Bowl receiver De’Andre Hopkins, trading him to Arizona. The team now has David Johnson in the backfield, but he has looked nothing like the back he was a few years ago. The Texans are poorly coached by Bill O’Brien and O’Brien’s fingerprints are all over a roster that continues to get worse every season. There is very little to like about Houston heading into the 2020 season.

The question in this game on Thursday is whether or not the Texans can score enough points to keep this competitive. The Chiefs didn’t have a great defense last season, but it did get better as the year went on. They allowed 24 points per game in the first 10 games, but they led the league, allowing just 11.5 points per game in the final six. “We expect to pick up where we left off last season, as one of the best defenses in the National Football League,” defensive back Tyrann Mathieu said to the media, “It wasn’t pretty, and I know we don’t have this extra amount of first-round draft picks. We’ve just got a lot of guys that work hard and fit our scheme really well. A lot of those guys are coming back. The expectation is to be one of the best defenses in the National Football League and obviously to start the season faster and finish even stronger.”

I know the Chiefs are overvalued in terms of the betting line and that is why the wiseguys have been taking Houston, but I want nothing to do with this team coached by O’Brien. They are going to be worse than they were a year ago and the Chiefs look better. There is no reason to think this game is going to be close, so I will lay the points and take Kansas City.