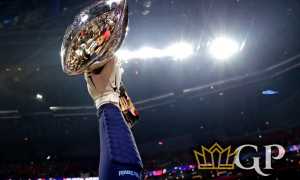 Even though theKansas City Chiefs were just crowned the 2019-20 Super Bowl Champs, it’s never too early to start breaking down the futures odds for Super Bowl LV set to go down at Raymond James Stadium in Tampa, FL.

Even though theKansas City Chiefs were just crowned the 2019-20 Super Bowl Champs, it’s never too early to start breaking down the futures odds for Super Bowl LV set to go down at Raymond James Stadium in Tampa, FL. Linemakers didn’t waste a single second getting their futures odds up for next year’s big game; some even before LIV came to a close. The defending champs are the current frontrunners to secure back-to-back titles with the 49ers, Ravens, Patriots and Cowboys in their rearview mirror. Per usual, the Dolphins and Redskins aren’t expected to have much of a chance; neither are the Jaguars, Bengals or Cardinals. With that, let’s dig into the numbers and see what they have to say about possibly pinpointing next year’s winner of the big game.

The Ravens got to experience what it was like to be one of the hunted over the course of the 2019 regular season. Unfortunately, it all caught up to them when it mattered most in the division round against what proved to be a Tennessee Titans team more readily able to deal with the pressure of performing with it all on the line. But before we jump to conclusions about how much John Harbaugh’s team choked in the playoffs, let’s take a moment to reflect upon how the team was able to earn the No. 1 seed in the AFC and snag the first round bye. After splitting its four played games against Miami, Arizona, Kansas City and Cleveland, Baltimore went on to rattle off 12 straight wins before succumbing to the Titans. On top of that, the Ravens ended up covering the closing NFL odds in all but three of those matchups. Lamar Jackson won the NFL MVP by way of leading the most potent offensive attack in the league, and it was backed up by the league’s No. 3 ranked scoring defense. With most of the pertinent pieces back in place for next year, the Ravens are going to be a nasty bunch to deal with over the course of the regular season and more than likely beyond. This time, they’ll be playing with a chip on their shoulder!

The Denver Broncos might’ve only played to a 7-9 overall record in Vic Fangio’s first season overlooking the franchise, but the way it went about its business at the tail end of the season leads me to believe it will become even more of a player in 2020 and beyond. Granted, the offense scored the fewest amount of points in the AFC West, but it had everything to do with the ineffectiveness under center before Drew Lock came into the picture. Once the Mizzou standout took over the reins in Week 13, Denver improved dramatically on that side of the ball. In just five starts, Lock went on to throw for over 1,000 yards and a 7:3 TD/INT ratio. With a full offseason to fine tune his craft, you can’t help but think he’ll take a gargantuan step forward in newly acquired Pat Shurmur’s offense. Armed with exciting young players like Philip Lindsay, Royce Freeman, Courtland Sutton and Noah Fant to get the pigskin to, Denver’s offensive playmakers will no doubt be sought after by fantasy footballers come next year’s fantasy drafts. Backing it all up will be Von Miller as well as Bradley Chubb who sat on IR most of this past season due to an ACL tear. Even with him out of the mix, Denver still ranked No. 10 in scoring defense. The needles pointing way up in Denver!

The Bengals taking a giant step forward in the second season of the Zac Taylor regime has everything to do with upper management selecting Joe Burrow with the No. 1 pick in the 2020 NFL Draft. As tempting it might be to select Ohio State’s Chase Young due to the fact that Cincy’s defense stunk out loud and needs a major dose of talent and athleticism shot into its veins, I’m not quite sure Young would have the same type of impact Nick Bosa just had for the 49ers. Burrow leaves the collegiate ranks NFLready off putting forth one of the best seasons ever seen at the college level. While the Bengals offense only ranked No. 26 overall and No. 30 in scoring, there are some prime time players on that side of the ball that can eat when fed the ball consistently and efficiently. It doesn’t get much better than having a player like Joe Mixon in the backfield to keep defenses honest. Burrow would also have some solid wide receiver talent to get the ball to in the forms of Tyler Boyd, Auden Tate, Alex Erickson and John Ross. With Burrow thrown into the mix, I really like the look of what Cincinnati could bring to the table in 2020-21. Winning the Super Bowl is more than likely a stretch, but I’ll bet you dollars to doughnuts the Bengals produce a winning mark against the spread; and that my friends is what this is truly all about!