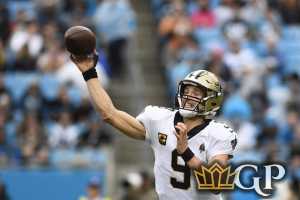 The NFL Playoffs continue on Sunday with another pair of riveting matchups; this time in the NFC. The San Francisco 49ers and Green Bay Packers will find out who they get to host in the division round following Sunday’s Wild Card Weekend slate.

The NFL Playoffs continue on Sunday with another pair of riveting matchups; this time in the NFC. The San Francisco 49ers and Green Bay Packers will find out who they get to host in the division round following Sunday’s Wild Card Weekend slate. All eyes will be on the Superdome to kick off the action when the Minnesota Vikings and New Orleans Saints collide in the playoffs for the second time in the last three seasons. Y’all remember what happened the last time they locked horns with the season in the line, right? Closing the weekend slate out will be the road warrior Seattle Seahawks who travel to the City of Brotherly Love for the second time this year looking to hand the Philadelphia Eagles another loss in front of their hometown faithful. Let’s dig into both matchups and see if we can’t come up with a few winners.

The only thing I needed to know heading into this grudge match between the Vikings and Saints was whether Dalvin Cook would be available to do his thing for a Minnesota offense that sorely needs production from its running backs to get out of this matchup alive. On top of that, I needed to know if Cook was 100 percent healthy and ready to go or just mouthing off some player’s speak in hopes of silencing all the noise. In sitting out the Vikings last two games of the regular season, it seems Cook is locked in and ready to go.

Even so, the Saints possess one of the best and more physical run defenses the league has to offer with it shutting opposing ground attacks to just over 91 yards per game (No. 4) while only conceding .8 touchdowns per game (No. 10). However, its 4.2 yard per carry allowed ranks out in the bottom half of the league. Also surprising is seeing that YPC average bump up to 4.6 when at home. Though New Orleans has made a number of running backs look nothing short of pedestrian this season, Cook is one of those special specimens that completely changes the landscape of a game.

If he’s 100 percent healthy and not in jeopardy of reinjuring himself, I simply don’t foresee the Saints being able to put enough distance between themselves and the Vikings to cover an impost like this. And yes, I’m taking the “Minnesota Miracle” into account when making that statement. Keep in mind, Drew Brees and company only covered half their home games this season. On top of that, Minnesota was very competitive away from the Twin Cities in going 4-4 SU and 5-3 ATS. Only the loss in Chicago would’ve covered this game’s pointspread with the other three losses to the Packers, Chiefs and Seahawks coming by an average of just 5 points per game. Would it shock me if Minnesota found a way to win this game outright? No. Would it shock me if New Orleans ran away and hid? Yes.

I expect this one to be competitive all the way through much like the team’s divisional showdown was back in 2018. With that, I’ll be taking as many points as linemakers at online sportsbooks offer up!

A tip of the cap goes to “The Visor” for finding a way to coach the Eagles into the playoffs. Philadelphia has been playing for its playoff lives for the last month. I like that heading into the second season when deciding upon which teams to back and fade on the NFL betting lines. While it’s bothersome that playing in multiple games with everything on the line could see it all come to a dramatic thud once finally qualifying, I find it hard to believe that happens with a team like the Eagles that’s less than two seasons removed from winning the franchise’s first Super Bowl.

However, there is plenty about the team entering this week’s revenge bout with the Seahawks that should have NFL bettors wary. Carson Wentz is still working with a skeleton crew on the offensive side of the ball. Making matters worse was rookie Miles Sanders leaving last week’s game with an ankle injury. On top of that, the QB1’s favorite target (Zach Ertz) is still listed as questionable with a supposed lacerated kidney and still hasn’t been cleared for contact in practice. That said, each was spotted at walkthroughs taking mental repsto kick off the week. Pederson has already gone on record about taking it slow with both players, but he’s of the belief each will be ready to go come Sunday.

Even if the duo can’t go, Boston Scott and Dallas Goedert have more than stepped up in their absence. Also don’t forget Jordan Howard will be available as well after being a healthy scratch from last week’s game due to the coaching staff wanting him to get into game shape to risk not losing him again.

The betting markets flocked to Seattle once the opening betting lines hit the board for this game. Linemakers initially opened the Eagles up 3-point favorites, but they’re now installed 1.5-point underdogs. I don’t need the points and won’t be taking them - Give me the money line! I truly believe the Seahawks are one of the biggest frauds to ever punch a ticket to the playoffs! Their best wins came against the San Francisco 49ers in overtime and the Eagles back in Week 12. They were extremely lucky to get by the Niners and they were the beneficiaries of 5 Philly turnovers to come out with the ugly 17-9 triumph in the first go round. Sorry, but the loss of both Chris Carson and Rashaad Penny will be dramatically felt in this one. No way an over the hill Marshawn Lynch does much of anything against the Eagles No. 3 ranked rush defense that allows 3.8 yards per carry and just over half a touchdown when at home!