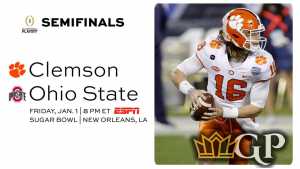 The second College Football Playoff game on New Year’s Day has the No. 3 Ohio State Buckeyes taking on the No. 2 Clemson Tigers. The Tigers are listed as a 7.5-point favorite with a total of 66. Let’s look at the game, some matchups and Sugar Bowl picks.

The second College Football Playoff game on New Year’s Day has the No. 3 Ohio State Buckeyes taking on the No. 2 Clemson Tigers. Both teams come into this with star quarterbacks, as the Buckeyes are led by Justin Fields, while the Tigers have Trevor Lawrence. The Tigers are listed as a 7.5-point favorite with a total of 66. The number opened at 7 and quickly went to 7.5, while the total opened at 65 and went up to 66. Let’s look at the game, some key matchups and Sugar Bowl picks.

No. 3 Ohio State Buckeyes vs. No. 2 Clemson Tigers

The Buckeyes and Tigers played in the 2019 College Football Playoff semifinal and it was Clemson winning 29-23. The Buckeyes led 16-0 in that game before Trevor Lawrence led the Tigers to a big comeback. Ohio State drove to the Clemson 23-yard line with 37 seconds left in the game, but Josh Fields was intercepted. The Tigers were beaten by LSU in the College Football Championship game, so Clemson feels they have unfinished business. Clemson won the title in 2016 and along the way they beat Ohio State 31-0 in the semifinal. The Tigers are 4-0 all-time against the Buckeyes.

"If we're playing Ohio State, it's a playoff," Clemson coach Dabo Swinney said to the media, "Or it was a BCS bowl, back in 2013 in the Orange Bowl. We don't have them on our regular schedule anytime in the near future, so you know it is a big, big postseason game when you play those guys."

We know that Clemson is going to score against the Ohio State defense, as they have Lawrence and Travis Etienne, so this game comes down to how well the Ohio State offense does against the Clemson defense. The Buckeyes will try to run the ball with Trey Sermon, who gained a school record 331 yards in the win over Northwestern in the Big Ten title game. Ohio State was No. 5 in the country in rushing offense, while Clemson was No. 9 against the run. The Buckeyes need to be able to run the ball because if Fields is forced to win the game then Ohio State could be in trouble. Fields has not played that well in Ohio State’s biggest two games this season. He was, however, pretty good against Clemson last year until the late interception. Clemson has the 26th best pass defense in the country led by Derion Kendrick, Andrew Booth and Nolan Turner. It should be noted that Turner will miss the first half of this game.

On the other side, Clemson had the edge against Ohio State. The Tigers have a potent passing attack, while the Buckeyes rank 104th against the pass. Clemson will likely be throwing it for most of the game because the Buckeyes are No. 7 in the country against the run.

I had a stronger opinion on the Rose Bowl than I do on the Sugar Bowl. It seems everyone is on Clemson in this game and that has me leaning toward taking Ohio State. The concern I have is the Ohio State secondary going against Lawrence. I don’t know that the Buckeyes can make enough plays to contain the Tigers passing attack. I also have concerns about Fields, as his play has been hit and miss this season. If he plays well, I think the Buckeyes can win this game, but if he struggles, they could get blown out. I lean toward Ohio State plus the points, but I think taking the over is probably the safer pick.