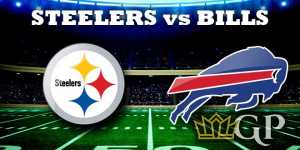 The Steelers are coming off their first loss of the season, as they were beaten by Washington, while the Bills are coming off a win against San Francisco. The Steelers are getting a big boost this week, as top running back James Conner and center Maurkice Pounce are coming off the reserve/COVID-19 list. Quarterback Ben Roethlisberger is aware of what his team is facing this week. "This is a very, very good football team," he said to the media about the Bills. "We're going to their place. Looks like crappy weather, night game, cold -- all the perfect elements that come with playing playoff-caliber football teams and in playoff-caliber situations at this time of the year."

On the other side of the ball, Josh Allen faces a Pittsburgh defense that ranks first in points allowed and they are second against the pass. They feature linebacker T.J. Watt, who leads the NFL with 12 sacks. "It's pretty impressive," Buffalo offensive coordinator Brian Daboll said to the media. The Bills could get a break, as the Steelers are going to be without linebacker Robert Spillane and they may also be without cornerback Joe Haden.

The Steelers will have to find a way to contain Josh Allen and the Buffalo passing game if they are to win on Sunday night. Allen has been playing at a very high level and he has a lot of weapons around him. Wide receiver Stefon Diggs is tied for the league lead in catches with 90 and slot receiver Cole Beasley has 66 catches. The Bills rank third in the league in passing yards per game at 276.4.  If the Steelers were at full strength on defense then they might have a chance to contain the Bills, but they are not. Pittsburgh is missing a number of key defenders. They don’t have one of their top pass rushers in Bud Dupree and now they are going to be without their top linebacker in Spillane. They may also be without Haden in this game. Allen should be able to make enough plays for the Bills to score points and win this game.

The Steelers are 10-2 ATS in their last 12 games against Buffalo. The total has gone under in four of the last five matchups between the Steelers and Bills.

I said last week that we had a choice of whether to follow the stats or to go against the public. We made the wrong choice last week, as we followed the stats and went along with the public and took Kansas City. We have a similar situation in this game. The numbers and stats support taking the Bills at home, but the public is backing Buffalo. I never like being on the same side as the public, but I think Pittsburgh is overrated. The Steelers haven’t played a difficult schedule and they were exposed a little bit last week in the loss to Washington. The Bills are a better team than Washington and they are playing at a high level. Buffalo made a statement last Monday night against the 49ers and now they get a chance to make another statement on NBC against the Steelers. I will take the Bills to get the win on Sunday night.

Check out the latest Week 14 odds at top online sportsbooks.