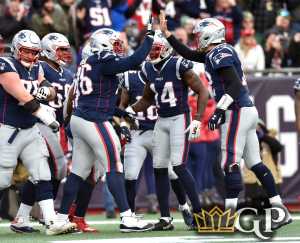 The NFL Playoffs have arrived! The Baltimore Ravens and Kansas City Chiefs will find out who they get to host in the division round following Saturday’s Wild Card Weekend slate. Sean McDermott has the Buffalo Bills back in the postseason for the second...

The NFL Playoffs have arrived! The Baltimore Ravens and Kansas City Chiefs will find out who they get to host in the division round following Saturday’s Wild Card Weekend slate. Sean McDermott has the Buffalo Bills back in the postseason for the second time in the last three years, and the team will no doubt be looking for more after fizzling out against the Jacksonville Jaguars back in 2018. Looking to prevent that from happening will be Bill O’Brien’s Houston Texans who seem to routinely fall in the wild-card round every passing season. By way of getting choked out by the Miami Dolphins in Week 17, the defending champion New England Patriots find themselves partaking in the first weekend of the playoffs for the first time since 2010. Their reward for spitting the bit is a matchup against a white hot Tennessee Titans squad many believe has a shot of pulling the upset. Let’s dig into both matchups and see if we can’t come up with a few winners.

The Bills had absolutely nothing to gain by going all-out against the Jets last week. Because of it, many of the squad’s key players got to rest up for what figures to be a war against a Houston Texans team that also waved the white flag at home last week versus the Titans much to the chagrin of the Pittsburgh Steelers who more or less gave up in Baltimore once Tennessee went up a few scores late.

Personally, I want absolutely nothing to do with the Texans in this spot and it has everything to do with the coach calling the shots. Bill O’Brien has proved to me year in and year out that he simply just doesn’t possess the chops to be a successful coach at the NFL level. Winning the division four of the last five seasons is one thing, but taking it to the next level in the playoffs is an entirely different animal.

Houston’s four division titles dating back to 2015 has amounted to a grand total of just one win and pointspread cover through four tries in the postseason, and three of those matchups took place in the comforts of NRG Stadium. Playing on the road didn’t faze Buffalo one bit this season evidenced by its 6-2 SU and 6-1-1 ATS records when playing away from New Era Field.

As much as I like the roster upper management has put in place, I respect the culture McDermott and his coaching staff has developed more than anything else. With the number to beat a half-point short of the key number, don’t even waste your time taking the points. Hit the Bills on the $-Line and watch as Josh Allen and the Bills defense hand Houston a second straight playoff defeat in front of its hometown faithful.

The last time Tennessee locked horns with Tom Brady and the Patriots, they found themselves on the wrong end of an ugly 35-14 beat down in the division round of the playoffs. Two years removed from that blood bath, things have come full circle for Mike Vrabel’s squad. Only this time, the Titans know exactly what to expect. On top of that, they have the added benefit of having a former Patriot leading them into battle so it’s pretty safe to assume the Patriots former linebacker will have a few choice words to offer his team up before kick-off.

A quick look at the Patriots schedule shows that it defeated a grand total of two teams currently in the playoffs; the Bills and Eagles. Making matters all the more worse is the fact that they won those games by an average of just 6.7 points per game. They lost the other three to the Ravens, Texans and Chiefs!

In other words, this isn’t your older brother’s version of the Patriots taking the field on Saturday night. Yes, going into Foxboro and coming out victorious in this day and age is darn near close to impossible. However, I truly believe New England is arguably one of the worst teams in the playoffs at this juncture, and their recent body of work only cements that assumption. The team just lost at home to the Miami Dolphins as 16-point favorites with a first round bye on the line for crying out loud! Brady has limited options to throw the ball to. There’s no semblance of a running game to fall back on. The defense is nowhere near as good as it was at the beginning of the season when the Pats took advantage of a laughable schedule. On the flipside, Tennessee finally has a solid offensive attack backed by one of the more tenacious defenses the league has to offer. The Titz have been fighting for their playoff lives for a number of weeks now, while the Pats knew they were in regardless after winning the NFC East for the umpteenth time. The Patriots have failed to cover the chalk at home three of the last four times and the one time they did, it took a miraculous showing in the fourth quarter to get by Buffalo. I seriously wouldn’t be shocked if the Titans pulled a wire-to-wire job on Saturday night. Take the points but make it a point to sprinkle some beer money on the $-Line as well!