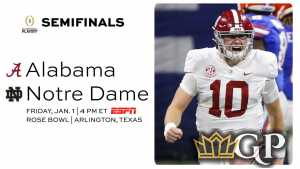 The first of the two College Football Playoff games on New Year’s Day is the Rose Bowl, as the No. 4 Notre Dame Fighting Irish take on the No. 1 Alabama Crimson Tide. Let’s look at this game, some of the key numbers and Rose Bowl picks.

The first of the two College Football Playoff games on New Year’s Day is the Rose Bowl, as the No. 4 Notre Dame Fighting Irish take on the No. 1 Alabama Crimson Tide. The game looks to be a major mismatch with the Crimson Tide listed as a 20-point favorite. The line on this game opened at 19.5 and is up to 20, while the total opened at 65 and is up to 65.5. Not many people are giving Notre Dame any chance to be competitive in this contest. Let’s look at this game, some of the key numbers and Rose Bowl picks.

No. 4 Notre Dame Fighting Irish vs. No. 1 Alabama Crimson Tide

This is the Rose Bowl but because California is led by a bunch of people who have no clue what they are doing, fans are not allowed at the Rose Bowl, so this game was moved to AT&T Stadium in Arlington, Texas. Neither team is expected to have an edge in terms of crowd support, but it really doesn’t matter anyway. Alabama is considered a powerhouse, while Notre Dame is just lucky to be in this game. These teams met eight years go in the title game and it was Alabama rolling to a 42-14 win. It could be a similar result on Friday, although higher scoring. Notre Dame should be able to move the ball, but they have no chance of stopping Alabama. "We're much better prepared than we were in 2012 in terms of the physicality on both lines," Notre Dame coach Brian Kelly said to the media, "I think we have the ability to move the football, certainly."

Notre Dame ranks 14th in scoring defense, but that number is a bit of a fraud. The Irish allowed more than 30 points in three of their last five games, including 34 to the Clemson Tigers. Alabama scored 50 points or more a total of six times. The Crimson Tide averaged 49.7 points per game, second-best in the country. Alabama has two Heisman Trophy contenders in quarterback Mac Jones who threw for 3,739 yards and 32 TDs and receiver DeVonta Smith who has 98 receptions for 1,511 yards and 17 touchdowns.  "We've certainly been very productive on offense," Crimson Tide coach Nick Saban said to the media, "This has been an unusual year for a lot of teams but I think our players have stayed focus on the right things amid a lot of abnormal things."

The only chance for Notre Dame in this game is if their offense is able to basically trade points with Alabama. The key matchup becomes the Notre Dame offense against the Alabama defense because we know that Notre Dame’s defense is not going to stop Alabama’s offense. The Notre Dame offense is good, but much of their success came against lesser competition. The Fighting Irish played three games against teams with top 40 scoring defenses and they scored 29.3 points per game. The Alabama defense is also good, but they struggled against top offenses. Alabama played four teams that had offenses ranked in the Top 40. They gave up 33.8 points per game in the four games.

Notre Dame has a good running back in Williams and Book is not a bad quarterback, so the Irish should be able to put points on the board. The problem for the Irish is that Book is not a great quarterback and to put up enough points to stay with Alabama, he needs to be great.

I think this number is inflated, but I am not going against Alabama. They look to be a machine on offense and Notre Dame is not going to stop them. I lean a little bit to the Crimson Tide, but I think the better play is the total. Notre Dame should be able to move the ball and score some points, while Alabama should score at will. I will go over the total in the Rose Bowl.