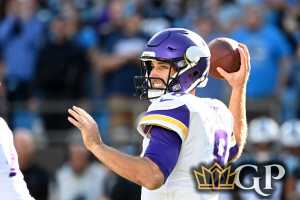 Week 9 NFL Against the Public picks are ready to roll. We are coming off a 4-2 -1 week to move the season record to 19-13-3. A successful method of picking winners in the NFL is going against the public. One thing of note with these picks is that you are almost always better off waiting until Sunday to bet them to get the best possible NFL betting line. If you waited until Sunday to bet these games last week you went 4-2-1. It is another week with a lot of plays on the board. Let’s look at Week 9 NFL against the public picks.

Week 9 NFL Against the Public Picks

The Vikings are not a good team. They have some good players but they are poorly coached and more often than not their key players don’t come through in the clutch. I am a little surprised the line on this game isn’t higher. Baltimore is better on both sides of the ball than the Vikings and they are at home. The public is sure in love with the Ravens so that means we take the Vikings plus the points.

The Cardinals are coming off their first loss of the season, but the public is right back on Arizona this week as they host San Francisco. The 49ers are a tough team to figure out, as they are capable of playing well and beating good teams, but whether they can handle the first place Cardinals is the question. The public likes the Cardinals so we take the 49ers plus the points.

The public is usually backing the Chiefs but they have noticed that Patrick Mahomes is not playing at a high level and they have seen enough of losing on Kansas City each week. The public normally backs Aaron Rodgers and the Packers and they are on Green Bay again this week. It is rare when we will ever be taking the Chiefs in this column, as they are normally a public team but not this week, as the public likes Green Bay. We go against the public and take the Chiefs.

This is a matchup between two of the worst teams in the league and the public is backing the Dolphins at home. If the Texans get Tyrod Taylor back at quarterback this week then they could be a live dog. On paper the Dolphins should win this game, but Miami continues to be a huge disappointment. The public likes Miami this week so that means we take the Texans plus the points.

The public is expecting the Bengals to bounce back this week after losing to the Jets. It could also be that the public is starting to sour on the Browns. It should not be a surprise that Cleveland is starting to have problems, as they have a ton of ego-centric players on the roster and when a team full of those types of players starts to lose, they begin to come apart. The public likes the Bengals this week, so that means we have to take the Browns.

The public is backing the Chargers on the road this week at Philadelphia. The Chargers were a team that surprised a lot of people early in the season but they have come back to earth recently, losing their last two games. It is hard to know what to expect from the Eagles on a weekly basis. The public likes the Chargers so that means we back the Eagles plus the points.

This one should come as no surprise, as the public is going against the Jaguars once again. It is hard to argue, as the Jaguars are poorly coached, have a rookie quarterback who doesn’t look ready, and now they may not have their top running back, as James Robinson is questionable. The Bills are better on both sides of the ball and the public is backing Buffalo so that means we take the Jaguars plus the points.

The public is starting to give a little love to the Patriots once again. New England has won two straight and their rookie quarterback Mac Jones looks like he can play. The Panthers finally got a win last week but it is still hard to have much confidence in a team with either Sam Darnold or P.J. Walker at quarterback. Darnold is in concussion protocol so he may not play this week. The public is backing the Patriots so that means we take the Panthers plus the points.

Check out the Week 9 NFL odds at top online sportsbooks.