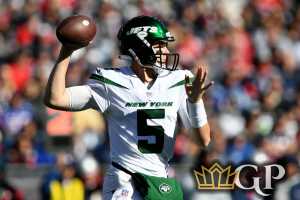 Week 8 NFL Against the Public picks are ready to roll. We are coming off a 1-2 week to move the season record to 15-11-2. A successful method of picking winners in the NFL is going against the public. One thing of note with these picks is that you are almost always better off waiting until Sunday to bet them to get the best possible NFL betting line. It was a second straight week of going 1-2, so it is time to get hot again this week and unlike the past couple of weeks we have a plethora of games on the docket. Let’s look at Week 8 NFL against the public picks.

Week 8 NFL Against the Public Picks

Was there any doubt that the Jets would be on the list this week?  The public wants nothing to do with the Jets and who can blame them, as the Jets looked pathetic last week and now they have a backup quarterback under center. The one positive is that the Bengals are a in a huge letdown spot after last week’s win over the Ravens. This is the NFL and nothing is certain. We’ll go against the public and take the Jets plus the points.

The Texans got some good news this week as Tyrod Taylor should be back under center. Houston didn’t look terrible with Taylor at quarterback and they will need him this week as their defense isn’t going to stop the Rams. This is a ton of points for a team to be laying on the road but the public is all over the Rams and that means we take the Texans.

The public is going against the Jaguars once again this week. In this case they are betting on a Seattle team with Geno Smith at quarterback. That has been a bad bet through the years, as Smith is simply not a good quarterback. The Seahawks used to have a big home field advantage but that edge also seems to be gone. It is not stopping the public, as they are taking the Seahawks and that means we take the Jaguars plus the points.

The Dolphins have been one of the most disappointing teams in the league this season and the public is now going against them. The Bills are at home and they look like the best team in the AFC. If the Dolphins are going to show any fight it should be this week so perhaps we are getting a little value on Miami. The public is taking the Bills so we take the Dolphins plus the points.

One team that the public is on nearly every week is Tampa Bay and it is hard to argue, as they look like another juggernaut. The Saints did win last week but that was against a Seattle team that looks weak. The Saints at home would seem to be a bargain but it is hard to trust Jameis Winston. The public is taking the Bucs so that means we take the Saints.

The Colts got a huge win last week and if they can pull off the win this week at home against the Titans they will be very much alive in the AFC South. There is no question that Tennessee looked great last week against Kansas City but the Chiefs are struggling right now. The public definitely believes in Tennessee, even on the road, so we go against the public and take the Colts plus the points.

Check out the Week 8 NFL odds at top online sportsbooks.