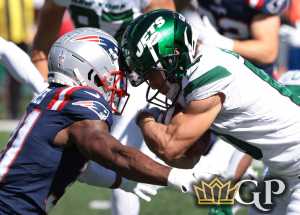 Week 7 NFL Against the Public picks are ready to roll. We are coming off a 1-2 week to move the season record to 14-9-2. A successful method of picking winners in the NFL is going against the public. One thing of note with these picks is that you are almost always better off waiting until Sunday to bet them to get the best possible NFL betting line. It was a heart-breaking Week 6, as our 1-2 record easily could have been 2-1, but the Patriots let us down in overtime. Let’s look at Week 7 NFL against the public picks.

Week 7 NFL Against the Public Picks

The public wants nothing to do with the Jets and even though New England has just two wins on the season, the public is backing the Patriots. The Patriots had some good moments last week against Dallas but they still found a way to lose. This should be a game that New England wins, but the Jets are coming off a bye and have had two weeks to get ready for this game. New York has struggled on offense for most of the season, but the New England defense is not playing well. It is hard to have too much confidence in Zach Wilson and the New York offense, but this game should give them some chances to put points on the board. We’ll go against the public and take the Jets plus the points.

You can make a case that the Giants are the most disappointing team in the NFL this season. Head coach Joe Judge is on the hot seat and there is not a lot to like about the Giants right now, as they come into the game at 1-5. New York has multiple injuries on the offensive side of the ball, as three of their top players are questionable for this week. Saquon Barkley can’t stay healthy and is injured once again and he could be joined on the sideline by receiver Kenny Golladay and Darius Slayton. The Giants did get quarterback Daniel Jones back last week, but you can make a case he shouldn’t have played, as he was returning very quickly from a concussion. The Panthers started the season strongly but since losing running back Christian McCaffrey they have struggled. Sam Darnold hasn’t proven he can make plays without McCaffrey behind him and the Panthers have been finding ways to lose. The public is going against the Giants so that means we take New York plus the points.

Did you ever think that you would see the Arizona Cardinals listed as a 17-point favorite?  The Cardinals are the only unbeaten team in the NFL and they look like a Super Bowl contender. They are very explosive on offense and their defense has played better than expected. The Texans were competitive early in the season but they have really struggled of late. Davis Mills is a rookie quarterback and he is making mistakes, so until the Texas get Tyrod Taylor back they are likely to continue to struggle. The one positive for Houston is that they have some offensive talent with running back Mark Ingram, Brandin Cooks and David Johnson. The Texans have major problems on defense so they need the offense to put up points to be competitive. That has not been happening with Mills under center. Not many people are giving them any chance to be competitive this week at Arizona. Perhaps the Cardinals will have a letdown, but will it matter? The public sure likes Arizona, so we take the big points and go with the Texans.

Check out the Week 7 NFL odds at top online sportsbooks.