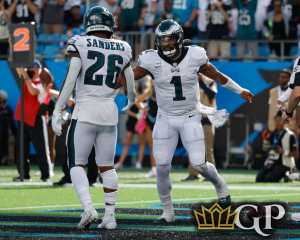 Week 6 NFL Against the Public picks are ready to roll. We are coming off a 1-1-1 week to move the season record to 13-7-2. A successful method of picking winners in the NFL is going against the public. One thing of note with these picks is that you are almost always better off waiting until Sunday to bet them to get the best possible NFL betting line. Let’s look at Week 6 NFL against the public picks.

Week 6 NFL Against the Public Picks

The public continues to back the Buccaneers on a regular basis and they are doing so again on Thursday night against the Eagles. The defending Super Bowl champs have looked like one of the best teams in the NFL again this season and Tom Brady is playing at an extremely high level. The Eagles have been up and down this season, as has quarterback Jalen Hurts. Philadelphia is at home in this game, but they don’t look to have the offense to keep up with the Bucs. The public sure thinks the Bucs are going to roll, as they are betting on Tampa Bay in this contest. We go against the public and take the Eagles plus the points.

Even though the Chiefs have a losing record and continue to burn gamblers this season, the public is back on them again this week. The public thinks the Chiefs will bounce back on the road in this game against Washington. The Chiefs have had a difficult schedule early in the season but they have also not played well. The defense has injury problems and even when everyone is healthy, they are not very good and now the offense now has some issues. Opposing defenses are starting to take away Tyreek Hill and making Patrick Mahomes show some patience. So far this season Mahomes has been missing open receivers and forcing the ball into coverage. Everyone was raving over offensive coordinator Eric Bieniemy and he still hasn’t lost his luster, but there is no question Kansas City is struggling offensively. It could be that Bieniemy leaves anyway, as he is rumored to be the leading candidate to take over the Raiders. Washington has had some good moments at times this season, but they are very inconsistent. The public is backing the Chiefs so that means we take Washington plus the points.

The public is backing the Cowboys in this game on the road at New England. It used to be that the Cowboys were one of the public teams along with the Packers and that is now the case again. Dallas has looked like one of the top teams in the NFL this season with an explosive offense and an improved defense. The Cowboys look stronger on both sides of the ball than New England and the public is laying the points with Dallas. New England has shown some signs of improvement and rookie quarterback Mac Jones looks like a keeper, but the Patriots don’t have the talent level of the Cowboys. It is still dangerous to give Bill Belichick points at home, but the public likes the Cowboys. We go against the public and take the Patriots plus the points.

There are two games this week that just missed being plays so we’ll mention them both. The public is on the Chargers plus the points at the Ravens. This looks like another high scoring game for Los Angeles and the public is starting to get on board with the Chargers. It is rare when we go with a team laying points, but we would go against the public here and take the Ravens.

The other play that just missed is the Bears plus the points against Green Bay. The public likes the Packers again this week, but the Bears played well last week against the Raiders and they are getting points again this week against Green Bay. That means the Bears would be a play plus the points.  Keep in mind that both the Chargers and Bears are plays that just missed and won’t be counted in the overall record.

Check out the Week 6 NFL odds at top online sportsbooks.