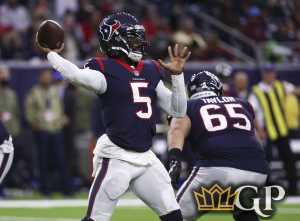 Week 13 NFL Against the Public picks are ready to roll. We are coming off a 2-0 week to move the season record to 34-20-3. We had just two plays last week but this week we have quite a few plays. Let’s look at Week 13 NFL against the public picks.

Week 13 NFL Against the Public picks are ready to roll. We are coming off a 2-0 week to move the season record to 34-20-3. A successful method of picking winners in the NFL is going against the public. One thing of note with these picks is that you are almost always better off waiting until Sunday to bet them to get the best possible NFL betting line. We had just two plays last week but this week we have quite a few plays. Let’s look at Week 13 NFL against the public picks.

Week 13 NFL Against the Public Picks

The Texans have not been a good team this season and the public is going against them again this week. The Colts have been a very difficult team to figure out, as they seem to have a lot of talent, yet they find ways to lose games. The public doesn’t think that will happen this week. We’ll go against the public and take the Texans plus the points.

The Bears are not a good team and even though they got a win last week they are still going nowhere. There is a good chance this will be the last season for head coach Matt Nagy and it is hard to see this team doing much the rest of the season. The public sure doesn’t like them, as they are going against the Bears this week and taking the Cardinals. That means we take the Bears plus the points.

The Giants got a rare win last week but it came against a bad Houston team. The public doesn’t believe in Big Blue and they are taking the Dolphins at home. This is really an ugly matchup, but the public is backing Miami so that means we take the Giants plus the points.

The public doesn’t yet believe in Washington even after they beat Seattle on Monday night. The public does like what they saw from the Raiders last week against the Cowboys and this number seems short. The public is taking Las Vegas, so that means we take Washington plus the points.

The Bengals are the hot team in the AFC right now along with the Patriots and the public is getting on the Cincinnati bandwagon. The Chargers have been up and down under Brandon Staley, as they make a lot of big plays but also make a lot of mistakes. The public is on Cincinnati, so we take the Chargers plus the points.

This one is no surprise, as the Bucs are a very public team. The Falcons are a complete fraud, as their five wins have come against weak teams. The Bucs should roll in this game, even on the road and that is exactly what the public thinks. We go against the public and take the Falcons plus the points.

This game is also no surprise, as the public likes the Rams and hates the Jaguars. It is hard to see anything other than a Los Angeles rout, but the Rams are not playing well right now and this is a big number. Jacksonville is definitely a bad team with a bad head coach and an overrated number one pick in Lawrence. This one is hard to do, but we don’t argue as we go against the public and take the Jaguars plus the points.

The public remembers what they saw last and what they saw on Monday was a Seattle offense that is pathetic. This Seattle team looks nothing like previous versions and even at home, the public is going against Seattle. Perhaps this game will be low scoring enough for Seattle to stay in it and it helps that the 49ers will be without two of their top players, Deebo Samuel and Fred Warner. We go against the public and take the Seahawks plus the points.

Check out the Week 13 NFL odds at top online sportsbooks.