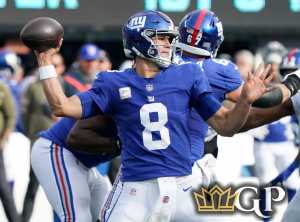 Week 12 NFL Against the Public picks are ready to roll. We are coming off a 3-3 week to move the season record to 32-20-3. A successful method of picking winners in the NFL is going against the public. One thing of note with these picks is that you are almost always better off waiting until Sunday to bet them to get the best possible NFL betting line. It is a very light week for this column with just two plays. Let’s look at Week 12 NFL against the public picks.

Week 12 NFL Against the Public Picks

The public is going against the Giants once again this week and why not? The Giants were routed on Monday in Tampa and there is no reason to think Joe Judge is going to get things turned around. Whether it is Judge and Jason Garrett who are the problem or whether the Giants don’t have enough good players is the question. What should be obvious to everyone by now is that Daniel Jones is not a franchise quarterback. He simply doesn’t look like a quarterback who can stand in the pocket and make good decisions on a regular basis. It probably doesn’t help that he has Jason Garrett calling plays, but regardless, Jones doesn’t make the throws he needs to make.

The Eagles seem to be going in the right direction having won two in a row and the public is staring to get on board. It is debatable whether Philadelphia is really a good team and despite their recent wins, I think the jury is still out on whether Jalen Hurts can be a good starting quarterback in the NFL. He makes a lot of plays with his legs, but in the NFL a quarterback also has to make plays with his arm and whether Hurts can do that is still in question. The public is all over the Eagles in this one so that means we take the Giants plus the points.

I say all the time that the public remembers what they saw last and one of the last things they saw was Justin Herbert and the Chargers getting a win over Pittsburgh. The public may have already forgotten that Denver has looked pretty good this season with Teddy Bridgewater under center. The Chargers are starting to become a public team but Los Angeles still has some major problems on defense and I am still not entirely sold that Brandon Staley is a good head coach. He takes a lot of chances and while many of his gambles have paid off, some of the risks he has taken have backfired. What we do know is that the public is taking the Chargers so that means we take the Broncos plus the points as a home dog.

The Giants and Broncos are the only two official plays this week. There was one game that just missed out on being a play and that was the Raiders +8 at the Cowboys. We won’t officially track this game, but it does make a lot of sense. The public loves to bet on the Cowboys and they are starting to sour on the Raiders. This is a Thanksgiving game and the public almost always bets the favorites on Thanksgiving, especially Dallas. The Raiders have not looked good in recent weeks and it is obvious that the problems in Los Angeles run deeper than just Jon Gruden. The Raiders are simply a dysfunctional franchise with a lot of issues on and off the field. This looks like a high scoring game that the Cowboys should win. The question is whether or not the Raiders can put up enough points to perhaps get a backdoor cover. It is hard to make a case for Los Angeles winning this game outright and it is always risky to take a team you don’t think is going to win but if you want a little Thanksgiving action, and want to go against the public, then the Raiders might be worth a look.

Check out the Week 12 NFL odds at top online sportsbooks.