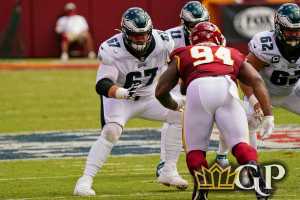 The Washington Football Team visits the Philadelphia Eagles on Sunday Night Football on NBC. It is all or nothing for Washington, as they will win the NFC East with a victory, but they will miss the playoffs with a loss. Let’s look at NFL odds and picks.

The Washington Football Team visits the Philadelphia Eagles on Sunday Night Football on NBC. It is all or nothing for Washington, as they will win the NFC East with a victory, but they will miss the playoffs with a loss. The Eagles have already been eliminated, but they would still like to keep Washington from winning the division. Washington is hoping to have Alex Smith available at quarterback, and he is the big key, as Washington is 10-5 with Smith starting and 6-26 with anyone else. Let’s look at Sunday Night Football and NFL picks.

The Washington Football team is a slight favorite in this contest on Sunday night. The line would dramatically shift to the Eagles being a favorite if Smith can’t go. We probably won’t know for certain whether it is Smith or Taylor Heinicke at quarterback for Washington until Sunday, but all indications are that Smith is going to be ready to go even if he doesn’t practice much. "I'm doing everything I can to get it right and ready to roll," Smith said to the media.

Washington is also hoping to have wide receiver Terry McLaurin in the lineup on Sunday. He missed last week’s game with an ankle injury. He has 1,078 receiving yards this season, more than double anyone else on the team.

On the other side, the Eagles are just playing out the string, although quarterback Jalen Hurts continues to play well. He threw for 342 yards last week in the loss to Dallas. He has averaged 340 passing yards and 66 rushing yards, with five touchdowns and two interceptions. If the Eagles had turned the quarterback job over to Hurts earlier in the season, they probably would have won the division. Carson Wentz threw for more than 270 yards just once all season.

This game comes down to whether or not the Eagles can stop the run. Washington has a capable running attack led by Antonio Gibson and with Smith at quarterback they will have a lot of play-action passing opportunities. Philadelphia has three key injuries on defense to monitor. Defensive end Derek Barnett has a calf injury, linebacker Shaun Bradley has a neck injury and the huge one is a neck injury to defensive tackle Fletcher Cox. If those three players are out then the Eagles are going to struggle stopping the run. The Philadelphia defense was terrible last week after Cox left the game due to injury. If he doesn’t play on Sunday the Eagles are in trouble against the run.

There is no question that Washington needs Smith under center and if he goes, I like Washington to get the win and take the NFC East title. The Eagles are definitely better with Hurts at quarterback and he gives them a chance to score some points, but Washington has a very good defense. This becomes a much stronger play if Cox does not play for the Eagles. Philadelphia may struggle to stop the run if Cox is in the lineup, but without him they have no chance to slow down the Washington running backs. You might also be able to make a case for taking this game under the total, but the Philadelphia defensive injuries and the fact that Hurts is under center for the Eagles make me a little leery of playing the under. I will stick to the side and lay the small number with Washington on Sunday night.

Check out the latest Week 17 odds at top online sportsbooks.