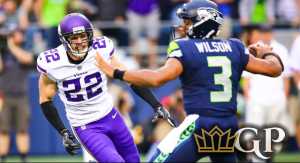 The road team has come out on top in each of the last two Sunday Night Football showdowns with the Green Bay Packers upsetting the New Orleans Saints as 3.5-point underdogs and the Philadelphia Eagles taking advantage of the injury ravaged San Francisco 49ers as hefty 8.5-point pups. Online sportsbooks would love nothing more than to see that streak reach three straight in Week 5 when Kirk Cousins and the Minnesota Vikings invade CenturyLink Field to do battle with Russell Wilson and the Seattle Seahawks. These teams met in this venue last season in a game the Seahawks outlasted the Vikings 37-30 to cover the closing 3-point NFL odds. The win moved Pete Carroll’s troops to 6-0 SU and 5-1 ATS in the last six run-ins against one another. That streak isn’t expected to be broken by those setting the lines with Seattle currently installed decided 7-point home chalk and the total the highest of the week at 57.

Oddsmakers initially opened the Seahawks 9-point home favorites with the O/U set at 58. Both the side and total have seen some line movement since. A major dose of reverse line movement has hit the pointspread with it down two full points to -7 regardless of 61 percent of the bet count booked in favor of the host Seahawks. There looks to be a clear Pro vs. Joe dichotomy with the sharp money hitting the Vikings early and public money continuing to filter in on the Seahawks minus the seven. A bit of RLM has also hit the O/U with it down a full point to 57 though 57 percent of the bets booked have come in support of a high scorer playing out much like last season. Sharp betting markets don’t look to be buying that either!

After getting their teeth kicked in the opening week of the season by Green Bay, the Vikings didn’t show much improvement the following week by dropping a one-sided 28-11 defeat in their first road trip to Indianapolis. However, Mike Zimmer’s squad showed signs of life in Week 3 when they had the Tennessee Titans on the ropes but failed to administer the knockout blow. The game proved to be rookie WR Justin Jefferson’s coming out party after he ripped the Titz for 175 receiving yards and his first professional touchdown. He and Adam Thielen played big roles in the Vikes 31-23 outright win and cover in Houston last week by combining for 217 yards and a score. Dalvin Cook also went HAM rushing for 130 yards and 2 TD. With that, it can be argued that Minnesota’s offense certainly has the firepower to hang in this one with Seattle, but can Kirk Cousins see it all the way through in another potential shootout?

Regardless of the Seahawks ranking dead last in total yards allowed and proving to be an absolute sieve at defending opposing passing attack, Wilson and company simply just continue to defy the odds. While the offense put forth another crooked number on the board last week in Miami racking up a combined 441 yards, the defense surrendered 415 total yards to FitzMagic and his band. Regardless, the Seahawks still found a way to win the game and cover the closing number in the process by logging the 31-23 triumph. Sooner or later, a defense is going to solve the riddle but it likely won’t be a Vikings unit that’s hemorrhaged yards both on the ground (No. 24) and through the air (No. 29) while producing a grand total of three takeaways (No. 27). The offense coughing it up seven times hasn’t helped matters either. Wilson and company will likely be able to do as they please. But can the defense come up with any stops?

Believe it or not, but the Vikings possess the top two ranked wide receivers (Jefferson/Thielen) and running back (Cook) in the game per profootballfocus.com. On the flipside, Seattle owns the No. 2 QB in Wilson. With all the efficient star power set to take the field, it comes within reason that this matchup does play out to the track meet linemakers expected when first establishing the betting market. All but one of Minnesota’s games have combined for high scorers with the lone under coming against the Colts No. 1 ranked scoring defense; Seattle checks in at No. 21. I came oh so close to taking the points with Miami last week thinking Seattle would have a rough go of it on the east coast in an early kick. While they did, the Fins made their job that much easier by committing costly turnovers and settling for field goals instead of going for it on fourth down to keep the pressure on Seattle all game long.

I’m thinking Minnesota forces the issue a full four quarters this time around. It played a brilliant first half against the Seahawks last season taking a 17-10 lead into the break. Unfortunately, they pissed down their legs in the third quarter getting outscored 17-0 and ultimately fell by a touchdown as 3-point underdogs. While the defense is much worse than it was a year ago, the Vikings are playing with a sense of urgency and moxie that has me leaning towards taking the points with them on Sunday night. But before I do, I’m going to wait it out and see if public bettors give me a few more points to work with. Cook was largely held in check in last year’s meeting. Should he hit the ground running in round two, I just can’t envision Seattle winning this game by more than a tuddy. I won’t call for the upset since Seattle seems to have the luck of the football gods bottled up, but the game should be there for the taking late which is all you can ask when backing a team getting this many points - SKOL!