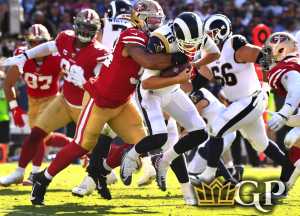 You might want to get used to seeing the San Francisco 49ers in last place in the NFC West this season. The 49ers host the Los Angeles Rams on Sunday Night Football on NBC and the Rams are road favorites. The 49ers come into this game at 2-3 on the season and they face the most brutal stretch of games that any team faces this season. In the next seven games the 49ers play the Rams, Patriots, Seahawks, Packers, Saints, Rams again and Bills. If the 49ers were at full strength and healthy, they might have a chance to survive that schedule, but they are not. Let’s look at the game between the Rams and 49ers and Week 6 NFL picks.

Most top online sportsbooks opened the Rams as a 3-point favorite with a total of 49.5. The early money has come in on the Rams, as they are now laying 3.5 and bettors are taking the game over, as the total has moved a full point to 50.5.

The Rams come into this game at 4-1 on the season but they have had a very easy schedule. They have had the benefit of playing the rotten NFC East and they have outscored the Cowboys, Redskins, Eagles and Giants by a combined 104-55. The 49ers also haven’t faced much this season, but the 49ers haven’t even won the games they were supposed to win, while the Rams have.

The Rams have a potent offense with solid receivers in Robert Woods and Cooper Kupp and a good tight end in Gerald Everett. Quarterback Jarred Goff has done enough to make plays and keep the offensive moving.

The 49ers have problems on both sides of the ball. On offense the 49ers have a quarterback in Jimmy Garoppolo who is coming back from an ankle injury. Garoppolo did not play well last week and was replaced by C.J. Beathard. Garoppolo went 7 of 17 for just 77 yards last week with two interceptions. Beathard wasn’t much better, going 9 of 18 for 94 yards. San Francisco head coach expects that Garoppolo will start this week. “Nothing too bad happened,” Shanahan said to the media, “We got him out of there before that did, so we’ll see how he is on Wednesday. I expect him to be at least the same, if not better, so hopefully he can get a week of that, and have no setbacks Thursday and Friday, and hopefully we get him out there Sunday night.”

The 49ers look nothing like the team that won the NFC last season. There is no question that injuries have decimated the defense, but the offense also has problems. The biggest problem is under center, as Garoppolo doesn’t look like a franchise quarterback. Right now he doesn’t even look like a competent one. I know the public is all over the Rams in this one and I hate going with the public, but I want no part of the 49ers right now. I will lay the points and take the Rams and also play the game to go under the total.