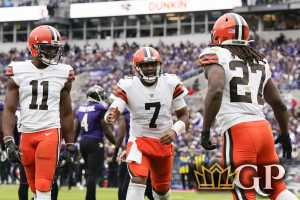 NFL Week 8 Against the Public picks are ready to roll. We are coming off our first losing week, as we went 1-3 ATS last week, but we are still 22-16-2 this season. A successful method of picking winners in the NFL is going against the public. One thing of note with these picks is that you are almost always better off waiting until Sunday to bet them to get the best possible NFL betting line. As mentioned earlier, we are coming off a 1-3 ATS record last week. The public is feeling really good about things after last week, so we have seven games to look at for this week. Let’s look at NFL Week 8 Against the Public Picks.

NFL Week 8 Against the Public Picks

The public has seen enough of the Saints and they are going against them this week and taking the Raiders. It is definitely hard to get excited about taking a New Orleans team with Andy Dalton at quarterback. The public likes the Raiders in this game, so that means we take the Saints.

One of the go-against teams for the public right now is Detroit and why not? The Lions are once again one of the worst teams in the NFL. The Dolphins looked good last week and the public is back on board with Miami with Tua under center. The public has Miami so that means we take Detroit plus the points.

This one is no surprise, as the Texans have the worst record in the league, and the public is going against them once again. What is a surprise is the line. This number was actually just 1.5 earlier this week but is now up to 3. It still seems low as the Titans lead the division, while the Texans just lose every week. The public is on Tennessee so we take the Texans plus the points.

The public is getting involved in what looks like an ugly game to me. Why would you back either of these teams? The public is going against the Colts who have benched Matt Ryan in favor of Sam Ehlinger. There is not much to like about the Commanders either, but they did play better last week with Heinicke under center instead of Wentz. The public likes Washington so we take the Colts minus the points.

The Monday Night Football game on ESPN this week has the Browns hosting the Bengals and Cleveland is listed as the home dog. This is definitely a matchup of teams going in opposite directions, as the Bengals have won two straight, while the Browns have lost four in a row. The Bengals are now starting to get more attention as serious AFC title contenders, while the Browns could be looking to trade away players if they lose this game and fall completely out of contention. The public is backing the Bengals, so we take the Browns plus the points.