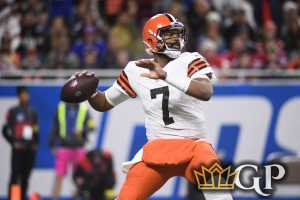 NFL Week 12 Against the Public picks are ready to roll. We are coming off a 1-1-1 ATS week that takes the record to 30-25-3 ATS this season. A successful method of picking winners in the NFL is going against the public. One thing of note with these picks is that you are almost always better off waiting until Sunday to bet them to get the best possible NFL betting line. As mentioned earlier, we are coming off a 1-1-1 ATS record last week.  If you waited until just before kickoff that record would be 2-1 ATS, as the Falcons won by three against the Bears. We recorded the line at -3, but it moved lower than that leading up to kickoff. We have just three games to look at for this week. Let’s look at NFL Week 12 Against the Public Picks.

NFL Week 12 Against the Public Picks

The public doesn’t want anything to do with the Browns right now and it is hard to argue, as Cleveland is tied for the 2nd-worst record in the AFC at just 3-7. This could be the last week for Jacoby Brissett at quarterback for the Browns, as Deshaun Watson is eligible to return next week. The season already looks to be lost for Cleveland, but a win on Sunday would at least give them some faint hope they could make a late playoff push. On the other side, the Bucs are coming off their bye, as they beat Seattle two weeks ago in Germany to improve to 5-5. It has been a disappointing season for the Bucs, but they play in the NFC South and a .500 record is good enough to be in first place. The public is backing the Bucs, so we take the Browns plus the points.

This one is no surprise, as the public is going against the Texans again this week. Houston has been the worst team in the NFL this season with just one win and now they go on the road to take on a Miami team that is tied for the 2nd-best record in the AFC at 7-3. Perhaps there is a glimmer of hope for the Texans in this game, as the coaching staff finally came to their senses and benched Davis Mills. Kyle Allen will take over and at least he has shown in the past he is capable of playing well and winning games. It won’t be easy on the road this week but it would be hard for the Texans to be any worse than they have been with Mills under center. The public likes the Dolphins, so that means we take the Texans plus the points.

The last game for this week has the public backing the Seahawks at home against the Raiders. Seattle has been one of the biggest surprises in the NFL this season, as they come into this game tied with San Francisco for the NFC West lead at 6-4. The Seahawks were thought before the season to be a team that couldn’t compete, but Geno Smith has played far better than expected and rookie running back Kenneth Walker is a stud. Seattle has the edge in this game playing at home, but it should be noted that Seattle has oftentimes struggles to win games they are expected to win. The Raiders are coming off a win over the Broncos that gives them some faint hope they can make a late playoff push. Las Vegas has been in almost every game this season but somehow found a way to lose seven times. Six of their seven losses have been by a touchdown or less. The oddsmakers and the public still don’t like the Raiders, as this line has gone up since it opened. The Seahawks opened as a 3.5-point favorite and the line is now up to 4. We’ll go against the public and take the Raiders plus the points.