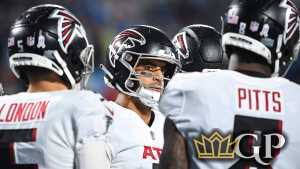 NFL Week 11 Against the Public picks are ready to roll. We are coming off a 3-3 ATS week that makes the record 29-24-2 this season. A successful method of picking winners in the NFL is going against the public. One thing of note with these picks is that you are almost always better off waiting until Sunday to bet them to get the best possible NFL betting line. As mentioned earlier, we are coming off a 3-3 ATS record last week.  Unlike last week, where we had a lot of action, with six plays, we have just three games to look at for this week. Let’s look at NFL Week 11 Against the Public Picks.

NFL Week 11 Against the Public Picks

The public seems to be enamored with Justin Fields even though the Bears are still not winning that many games. The Bears lost again last week to drop 3-7 and that means they are in last place in the NFC North. The Falcons are not much better at 4-6 but they play in a weaker division and Atlanta is not out of the race in the NFC South. The Falcons were thought to be one of the worst teams in the NFL before the season began, but they have been competitive this season and they have been a profitable team to bet, as they are 6-4 ATS. The Falcons continue to get very little respect from the public, as bettors are taking the Bears. The oddsmakers are starting to realize that Atlanta is a team to keep an eye on and the Falcons are favored this week. The Falcons seem to play close games every week and this should be another game that is decided late. It is rare when we lay points in this column but that is the case in this game. The public is on the Bears, so we take Atlanta minus the points.

This game is not much of a surprise, as the public is going against the Texans again this week. The public just saw the Commanders hand the Eagles their first loss of the season and the public always remembers what they saw last. The Texans have the worst record in the NFL but they at least look like they are playing hard throughout each game. The Commanders are getting a lot of respect from the oddsmakers, as Washington is laying points on the road. The Texans have just one win on the season but they are 4-4-1 ATS. This is an interesting game, as Houston is at home and they are getting points. The Commanders are definitely nothing special and despite the win last week, Washington still has problems on both sides of the ball. We’ll go against the public and take the Texans plus the points.

The oddsmakers must know something, because the Giants are just a 3-point home favorite against the Lions. Detroit did beat Chicago last week, but the Lions are just 3-6, while the Giants are 7-2. Why is the line so short on this game? The public is definitely thinking the same thing, as they are taking the Giants in this contest. You would think that the line would be moving toward New York, but that has not been the case. The Giants actually opened as a 3.5-point favorite and the number is now at 3. Normally when you have a 7-2 team at home taking on a 3-6 team the line would at least be a touchdown, yet in this case, the Giants are only a 3-point favorite. Is this a trap game from the oddsmakers? The public sure doesn’t think so or doesn’t care, as they are backing the Giants. The Lions have actually been okay against the spread this season, as they are 5-4 ATS. The public is taking the Giants so that means we go against the public and take the Lions plus the points.