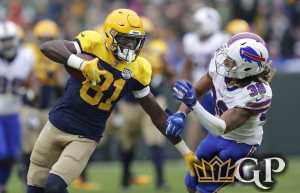 NFL Preseason Week 3 odds are on the board at top online sportsbooks. Unlike previous preseasons, this time around Week 3 will be the last week of the preseason and then there will be a full week off with the regular season not beginning until Thursday, September 9. What are we going to get in Week 3? Will starters play just a short time and then be pulled or will some teams play starters longer because of the extra week in between the last preseason game and the regular season?  Let’s look at NFL Preseason Week 3 odds and picks.

One thing we know about Zimmer and Reid is that they just want to get to the regular season without losing any players to injury. I don’t expect the starters to play much at all, so this should be a low scoring game. I will go under the total in this one.

You already know that the Packers are a go-against in the preseason because they are resting most of their starters. That is not going to change in this game and regardless of who the Bills play, they should win this game. I don’t get thrilled about laying seven points in the preseason, but I am going against the Packers again and that means taking Buffalo minus the points.

The Rams are an automatic go-against in the preseason this year, as head coach Sean McVay announced long ago that none of his starters are going to play in the preseason. The Rams played pretty well last week with their backups against the Raiders, but I don’t see that happening this week on the road in Denver. This one could get ugly, with the Rams getting routed. I will lay the points and take the Broncos.

The Seahawks have not played many of their starters this preseason but that is expected to change on Saturday Night. Head coach Pete Carroll said this year he is doing things differently and because the team has 15 days off after this game he thinks they will have plenty of time to recover. The Seahawks will be game planning like this is a regular season game. I expect a much better performance from Seattle on Saturday as they want a win going into the regular season. I will take the Seahawks in this game on Saturday night.

I am a little surprised that the 49ers are favored in this one. Gruden has been a coach who likes to win preseason games and there is no question that Shanahan is going to be very cautious with his starters. The 49ers were decimated by injuries a year ago and I can’t see Shanahan taking any chances with valuable players in this meaningless game. I’ll take the road team to get the win in his game.

The Falcons are a mess at quarterback after Matt Ryan, as backup A.J. McCarron got hurt last week and is out for the year. Atlanta will be playing some quarterbacks you have never heard of and that is why the Browns are road favorites. I have to lay the points and take the Browns in this one.