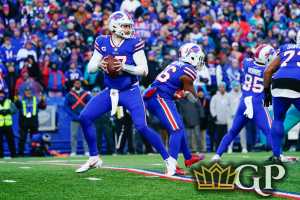 NFL Divisional Weekend Against the Public picks are ready to roll. We are coming off a 2-1 ATS mark last week. That takes the record to 43-39-4 ATS for the season. A successful method of picking winners in the NFL is going against the public. One thing of note with these picks is that you are almost always better off waiting until game day to bet them to get the best possible NFL betting line. As mentioned earlier, we are coming off a 2-1 ATS record last week. Keep in mind that the playoffs are different and we don’t have the same type of percentages in terms of public betting. We have two games to look at for this week. Let’s look at NFL Divisional Weekend Against the Public Picks.

The public is backing the Bengals in this game on Sunday afternoon. We know that this is game will have a lot of emotional moments since it is a rematch of the game that was cancelled when Damar Hamlin was injured. Who knows how the emotion will affect both teams but we do know that the public likes Cincinnati plus the points. It is a matchup between the two hottest teams in the AFC, as the Bengals have won their last nine games, while the Bills have won their last eight.

The Bengals rank in the Top 10 in points scored and in fewest points allowed. It is all about passing for Cincinnati, as they were 5th in the league in passing yards behind Joe Burrow and near the bottom of the league in rushing yards. The Bengals were stout against the run defensively but a little weak against the pass.

The public is back to normal for the last game of NFL Divisional Weekend, as they are taking the 49ers minus the points against Dallas. The 49ers are the hottest team in the NFL, as they have won their last 11 games. We saw a little sign of weakness in San Francisco last week, as they actually trailed Seattle at the half, but it was all 49ers in the second half. The Cowboys looked about as good as they could possibly look last week in a win over an inept Tampa Bay team. Whether the Cowboys were really that great or whether the Bucs were simply that bad is up for debate. We will find out this week just how good Dallas is because the 49ers look like the best team in the NFL.

The Cowboys were 4th in the league in points per game this season and 5th in fewest points allowed. They were better running the ball than throwing it but Dak Prescott did look good last week vs. Tampa Bay. The Dallas defense is better against the pass than they are against the run, so Christian McCaffrey could be poised for a big day for the 49ers.

The public is backing the home team in this game and laying the points with the 49ers so that means we take the Cowboys plus the points.