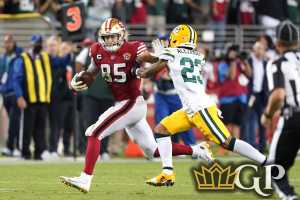 NFL Divisional Playoffs Against the Public picks are ready to roll. We had a successful regular season going 44-35-4, but things are a bit different in the playoffs. We said last week that the public consensus is not the same in the NFL Playoffs like it was in the regular season. During the regular season we looked at a certain percentage that favored public betting but that percentage will probably be lower in the playoffs. That was definitely the case with the two plays for last week that both lost. The same thing is happening again this week, as there is only one play that gets close to being a consensus against the public play. Let’s look at NFL Divisional Against the Public Picks.

The public is backing Green Bay at home in this contest on Saturday night. It is not a big surprise, as the Packers are the top seed in the NFC and the current favorite to win Super Bowl XLI. These teams met earlier in the season and it was the Packers pulling out a 3-point road win. The 49ers are coming off a win last week in Dallas, while the Packers had a bye. San Francisco is a good team that could give Green Bay trouble in this contest. The 49ers rely heavily on their running attack, which ranked 7th in the league in yards per game. San Francisco has been even better since they put Deebo Samuel into the backfield, as his explosiveness has given the 49ers a new dimension. San Francisco is not going to win the game with Jimmy Garoppolo throwing the ball all over the field, so they need to run the ball effectively to win.  The 49ers also have a very good defense that ranked 3rd in the NFL in fewest yards allowed. San Francisco is capable of slowing down the explosive Green Bay offense.

The Packers won a lot of games and while their overall numbers are good, they are not great. The Packers were just 10th in the NFL in total yards and total points per game. They were 8th in the NFL in passing yards per contest. Aaron Rodgers finds ways to win games, but Green Bay doesn’t blow out a lot of teams. The 49ers are also just 9th in fewest yards allowed and 14th in fewest points allowed.  The key in this game will be whether or not the Packers can slow down the 49ers rushing attack. The public is backing the Packers at home minus the points, so we’ll take San Francisco plus the points.

The public is not in love with any of the other three games in terms of the sides, but they are betting a couple of totals, so for the first time this season we’ll go against the public on a couple of totals. It should come as no surprise that the public is taking the Bills and Chiefs over the total. These two teams have played some high scoring games recently, including each of the last two meetings with the Chiefs blowing out the Bills in last year’s playoffs, while the Bills returned the favor in the regular season, winning 38-20 at Kansas City. The Bills were 3rd in the NFL in points per game, but people might forget that the Bills led the league in fewest points allowed. Kansas City was 4th in the league in points per game and they were 8th in fewest points allowed.  The public is taking the over, so we’ll go under the total.

The public also is betting the Rams and Bucs to go over the total. This is not a total surprise but the stats don’t necessarily point to a high scoring game. The Rams were 8th in the league in points per game and 15th in fewest points allowed, but the Los Angeles defense has a number of big-time players who usually show up well in the playoffs. The Bucs were 2nd in the league in points per game but they were 5th in the league in fewest points allowed. These teams met earlier in the season and it was the Rams winning 34-24 at home. Both the Rams and Bucs are going to try and run the ball in this game to take pressure off their quarterbacks and this game could have fewer points scored than many people expect. The public is taking the over, so we’ll go under the total.