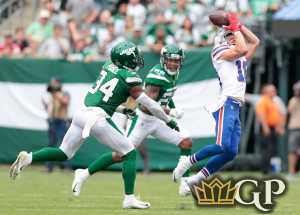 The NFL betting season will have 17 weeks in the books after the 49ers and Seahawks collide on Sunday Night Football. The betting lines have been adjusted ever since hitting the board earlier last Sunday night.

The NFL betting season will have 17 weeks in the books after the 49ers and Seahawks collide on Sunday Night Football. The betting lines have been adjusted ever since hitting the board earlier last Sunday night. Public bettors aren’t the ones that move the lines when it comes to the NFL. It’s the wise guy picks, and the ones made – especially early in the week – set the markets to allow for online sportsbooks to adjust their offerings. The following are some of the more noticeable line moves that went down this week once sharp money got involved. The wise guy picks finally got back in the money last week with a 4-2 ATS showing. Let’s put a bow on the regular season and close it out in style!

The Texans were a favorite of the wise guys last week in Tampa Bay where they ultimately secured the 23-20 win much to the chagrin of those that got into the marketplace late. Sharp bettors however all cashed in after the game initially opened up at -2.5. The wise guy picks are going back for more in Week 17 even though it’s still unknown which starters will even take the field for Bill O’Brien. Regardless, both public and sharp bettors don’t look to be Titans believers regardless of linemakers protecting themselves with an enormous line move.

Baltimore will be without Lamar Jackson and a number of other key cogs to the Ravens machine. With that, the wise guy picks hammered Mike Tomlin’s troops who need two things to happen on Sunday to punch a ticket back to the playoffs after a year hiatus. First and foremost, they need to split the season rivalry with their hated nemesis. Second, they need the Texans to find a way to bust the brooms out on the win-hungry Titans. Should both occur, the Steelers will enter the second season as the No. 6 seed in the AFC. Sharp bettors are betting on both of those things occurring in Week 17!

The Bills have absolutely nothing to play for heading into their home finale. They’re locked into the No. 5 seed regardless of whether they sweep the division rivalry from the Jets this week or not. Why risk injury to any key player then? It’s highly likely Josh Allen and company see the field in the first half just to remain fresh, but once a lather is built up, wise guys expect Sean McDermott to err on the side of caution and bring in his backups. Because of it, the Bills have turned into 1.5-point underdogs after initially opening up as 4.5-point chalk.

All the New England Patriots need to do to lock down the No. 2 seed in the AFC on Sunday is beat the Miami Dolphins; a team they’re favored to defeat by 16-points. Kansas City would no doubt need a miracle to leapfrog them in the overall standings. Even so, a steady flow of wise guy money has filtered in on the Chiefs with the likely belief Andy Reid goes all out just to make sure Patrick Mahomes and company get to host at least one playoff game. Online sportsbooks will no doubt be sweating this one out with KC up to 8.5-point favorites while also checking in as one of the biggest teaser legs of Week 17.

If you can believe it, the Raiders still have a shot of qualifying for the playoffs. They can thank the Pittsburgh Steelers and Tennessee Titans for that after each went down in defeat last week. They’ll need both to go down once again this Sunday, but two more things would still be required for the silver and black to pull off the unthinkable. They’d have to defeat the Broncos in Mile High Stadium – a venue they’ve gone 1-6 SU and 3-4 ATS the last seven times – and would need the Indianapolis Colts to defeat the Jacksonville Jaguars. The Raiders have seen a bunch of support from both public and sharp bettors, so take that for what it’s worth.

Now this one had me raising a brow. While both the 49ers and Seahawks have gotten some love from the wise guys this week, it’s Seattle that’s gotten the most of it. Very interesting! I personally feel Pete Carroll’s troops were extremely lucky to get out of Levi’s Stadium with a win in overtime back in Week 10. On top of that, Seattle has surprisingly been at its worst when in front of the 12th Man as opposed to being on the road this season. San Francisco already gave up home field advantage throughout the NFC playoffs once this season, so I find it very hard to envision them doing it again. The wise guy picks believe otherwise however.