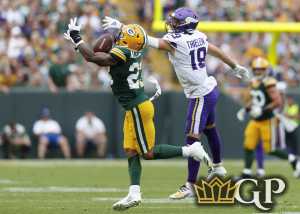 The battle for NFC North supremacy will grace NBC’s airwaves in the season’s final installment of Monday Night Football in Week 16 when Aaron Rodgers and the Green Bay Packers invade U.S. Bank Stadium looking to sweep the season rivalry from Kirk...

The battle for NFC North supremacy will grace NBC’s airwaves in the season’s final installment of Monday Night Football in Week 16 when Aaron Rodgers and the Green Bay Packers invade U.S. Bank Stadium looking to sweep the season rivalry from Kirk Cousins and the Minnesota Vikings for the second time in the last three seasons. Each team enters this tilt red hot with the Packers winning three straight off a home win and cover over the Bears, while the Vikings return home winners of two in a row both straight up and against the NFL odds after throttling the Chargers in Tinseltown last week. The betting markets look to be all in on the Cheeseheads catching the points with Dalvin Cook not likely to suit up. Take it all in live on ESPN with kick-off slated for 8:15 p.m. ET!

The home based Vikings initially hit the betting board as 4.5-point favorites with the game total lined at 46.5. The number to beat has shifted dramatically in favor of Minnesota even though a majority of the bets and money has filtered in on the current division leaders who already own the tiebreaker and sit a game up in the standings. Green Bay has taken in 64 percent of the bets as well as 73 percent of the money with it coming from both public and sharp money accounts. While the total has seen bets and money come in on both sides of the impost, the number to beat is down a full point to 45.5; hardly a shock with the teams combining for low scorers in four of their last five skirmishes as well as each of the last five times they squared off in the Twin Cities.

While it wasn’t the prettiest of efforts and they had to hold on for dear life at the tail end of the game, the Packers once again did just enough to effectively end Chicago’s season by securing the 21-13 win and cover as 4-point favorites. Green Bay lost the time of possession battle by nearly 10 minutes and was also outgained by over 120 yards. Even so, Aaron Rodgers continued to make the Bears his bitch. The triumph moved Matt LaFleur’s squad to 11-3 in his debut season as head coach. More importantly, the cover pushed them to 9-5 against the closing NFL odds. They’ll invade Minneapolis owners of 4-2 SU and ATS records on the road having last throttled the Giants 31-13 as near touchdown chalk back in Week 13. Green Bay has lost and failed to cover each of its last three visits to U.S. Bank Stadium losing by an average of 4.3 points per game.

Even with Dalvin Cook reinjuring himself early on, the Vikings didn’t skip a beat and still went on to dismantle the Los Angeles Chargers in front of a Dignity Health Sports Park crowd filled with a sea of purple. Cousins was extremely efficient in completing 19 of 25 passes for 207 yards and 1:1 TD/INT ratio, while Mike Boone and Ameer Abdullah picked up the slack in the backfield combining for 81 total yards and 2 TD. The defense even got in on the scoring act when Ifeadi Odenigbo scoop and scored from 56-yards out to allow for the Vikings to go into halftime up 19-10. It was all Minnesota in the second half who went on to outscore the Bolts 20-0 to log the impressive 39-10 win and cover as short 1-point favorites. The squad now returns home where it’s won all six games and covered four of them against the closing pointspread.

While Minnesota has been the dominant side in this division rivalry in going 5-2-1 SU and 5-3 ATS in the last eight overall meetings, I want nothing to do with laying what looks to be an inflated number with them on Monday night. Remember, linemakers initially opened the pointspread for this tilt up at -4. With the heart and soul of the offense roaming the sideline, it’s going to make life much tougher for Cousins without a consistent ground game to rely upon. It’s still unknown as to whether rookie Alexander Mattison will be good to go for this one, and NFL bettors are yet to see what Mike Boone has to offer in a competitive game.

As good Minnesota’s defense has been at preventing opposing offenses from lighting up the scoreboard in allowing just over 18 points per game (No. 7), it’s had major issues preventing passing attacks from going off (No. 20). That’s not a good omen when running up against Aaron Rodgers who already got to them for 209 yards and 2 TD while making sweet music with Davante Adams back in the second week of the season. I’ll be taking the points on Monday night and will also be throwing some beer money on the Packers money-line to make things a bit more interesting. Also look for some points to finally hit the board in the rematch.