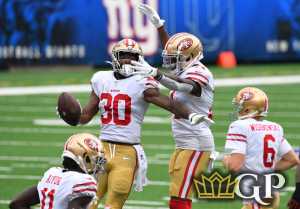 The Philadelphia Eagles visit the San Francisco 49ers on Sunday Night on NBC. The defending NFC champs are currently installed decided 7-point home chalk to move to 3-1 SU with the total lined at 46 for this tilt under the Sunday night lights.

The 2020-21 NFL betting season couldn’t have gotten out to a worse start for the Philadelphia Eagles. I take that back; Doug Pederson’s squad could’ve lost to the Bengals last week instead of settling for a tie. Regardless, it’s been rough sledding in the City of Brotherly Love. The same can be said of the San Francisco 49ers as well. Not so much from a win/loss perspective, but from an overall point of view. The injury bug has decimated Kyle Shanahan’s roster; especially on the defensive side of the ball. Though none of those integral pieces will be back for this Week 4 concluder, it’s believed that both George Kittle and possibly Jerick McKinnon will be back in the huddle. That’s great news for Nick Mullens who shined in last week’s beat down of the Giants. The defending NFC champs are currently installed decided 7-point home chalk to move to 3-1 SU with the total lined at 46 for this tilt under the Sunday night lights.

Oddsmakers initially opened the 49ers 3.5-point home favorites with the O/U lined at 45.5. Both the side and total have moved since. The betting markets look to want absolutely nothing to do with the Eagles on Monday night with the number to beat up 3.5-points to a full touchdown. A healthy 63 percent of the betting handle has come in support of the drastic line move. Though the total has only moved a half-point since the open, online sportsbooks are currently seeing upwards of 70 percent of the bet count in favor of a high scorer playing out. Needless to say, those booking the bets will be big fans of the Eagles and the under come Monday night!

Gross! That’s simply the only way one can describe the first three weeks of the Eagles 2020-21 campaign. It kicked off with a shocking 27-17 loss to the division rival Redskins, and has continued to go downhill since. The team was then blasted at home by the Los Angeles Rams in a game the Eagles’ retooled secondary allowed Jared Goff to rip it apart to the tune of 267 passing yards and 3 TD. While the defensive front managed to tally eight sacks against Joe Burrow last week, it still allowed the rookie quarterback to carve them up for another 312 passing yards and two more touchdowns. Darrius Slay hasn’t made much of a difference in the secondary; it still sucks! It’ll be back to the drawing board if Mullens does it as well tonight.

The NFC West looks to be the most improved division in all of professional football. With that, the reigning NFC champs got their work cut out for them this season if they’re to pull off the repeat. That was discovered right at the outset after Kyler Murray and the Arizona Cardinals went into Levi’s Stadium the opening week of the season and handed the 49ers a 24-20 outright defeat as 7-point underdogs. Because of it, the Niners were faded by NFL bettors in both of their games against the Jets and Giants the last two weeks. That proved to be an unwise move after San Fran roasted both squads by the aggregate score of 67-22 to cover the closing NFL odds with ease in both contests. San Francisco returns to the bay looking for that first home win.

If the Eagles are to come out of this matchup with a win, they’re going to need to put a near perfect effort together. Philadelphia currently ranks dead last in the league in turnover margin. It’s only tallied one lone takeaway through three games and coughed it up eight times (No. 32). On the flipside, the Niners have tallied four takeaways and only committed one turnover. Even so, I can’t help but think Pederson and his staff will have cooked up something special for this matchup as desperate the team is to log that first win of the season. Though Philly has its fair share of injuries to deal with on the offensive side of the ball, the talent that still remains is leaps and bounds better than anything the Giants or Jets brought to the table the last two weeks. Because of that, the 49ers were able to avoid being exposed due to all the injuries incurred within the stop unit. Not tonight! This is the game the Eagles draw a line in the sand and go after it. Not even an injured buttocks will prevent Miles Sanders from going HAM in this one to help aid Carson Wentz in putting forth a sorely needed bounceback effort. Snag as many points as possible and hit the Eagles on the moneyline; Philly outright!