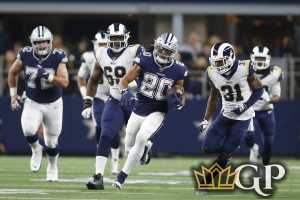 Two teams going in opposite directions in terms of public support meet on Sunday night on NBC, as the Dallas Cowboys visit the Los Angeles Rams. Check out the latest Week 1 NFL odds and Cowboys vs. Rams picks.

Two teams going in opposite directions in terms of public support meet on Sunday night on NBC, as the Dallas Cowboys visit the Los Angeles Rams. The Cowboys are getting a lot of love from bettors this season, as Dallas is the favorite to win the NFC East and a Super Bowl contender. On the other side, the Rams are not getting much support from bettors, as they are the third choice just to win their own division, the NFC West. Public support has pushed the line on this game up to Dallas -3. Let’s look at the matchup and NFL picks.

The early line move went toward the Cowboys, as the line moved from Cowboys -2.5 to Cowboys -3. The total has moved up from an opener of 50 to the current total of 51.5.

The Rams will play their first game in their new $5 billion dollar stadium, but no fans will be in attendance to see the opener. The Rams are coming off a disappointing 9-7 season that saw them miss the playoffs, just a year after making the Super Bowl.

The Cowboys went just 8-8 last season and finally owner Jerry Jones got rid of Jason Garrett. He hired Mike McCarthy and nothing short of playoff success is going to be tolerated in Dallas this season. The public is sure on board with the Cowboys, as Dallas is one of the top contenders to win the Super Bowl this season.

The question early in the season is how these teams will perform with no preseason games to get the kinks worked out. "I think a number of teams lose games early in the season as opposed to getting beat," McCarthy said to the media, "We need to focus on the things we have accomplished in training camp. Our expectation is to keep the focus tight, win today and prepare to win in Los Angeles Sunday night."

The first week of the season is going to be extremely unpredictable. The first week is always difficult because we really don’t know how good teams will be. That is even more the case this season with no preseason games. The Cowboys are expected to be improved, while we really don’t know what to expect from the Rams. If I was to play a side, I would probably lean to taking the Rams plus the points, simply because I hate going with the public and there is no question the Cowboys are the public’s choice in this game. I think the better choice in this game is the total. It would not surprise me at all to see a lot of low scoring games in Week 1. None of the teams have had any preseason action and offenses are almost always behind defenses when it comes to early action. The preseason is usually when offenses work out the kinks and everyone gets on the same page.  That will not be the case this season. I will take Sunday night’s game under the total.