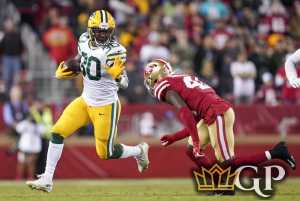 All that stands in the way of the San Francisco 49ers heading back to the Super Bowl for the seventh time in franchise history are the pesky Green Bay Packers who will be out to punch their sixth overall ticket to the big game.

All that stands in the way of the San Francisco 49ers heading back to the Super Bowl for the seventh time in franchise history are the pesky Green Bay Packers who will be out to punch their sixth overall ticket to the big game. NFL bettors already got a glimpse of these division winners running up against one another back in Week 12 when the Cheeseheads got the ever living tar beaten out of them. Though the 37-8 final tally was every bit as dominant as its looks on paper, the betting markets aren’t flocking to the 49ers in the rematch like you would expect. Instead, it’s Green Bay that’s taken a majority of the money in early wagering after holding on for both public and sharp bettors against the Seahawks last week. This is the second to last meaningful NFL game of the season, so tune into FOX at 6:40 p.m. ET and see how it all plays out!

Wash, rinse, repeat; linemakers didn’t stray too far from the course setting the line for the 49ers second straight NFC North opponent. Just like they did against the Vikings, San Francisco opened as touchdown favorites at online sportsbooks with the total set at 44.5; the same O/U as the Minnesota game. With that, you can deduce that those setting the betting lines have the Vikings and Packers rated out identically. The former didn’t fare too well last week, but that hasn’t stopped the betting markets from infiltrating the market with Packers money. Though San Francisco has taken in 52 percent of the bet count, it’s Green Bay that’s taken the early money with just over 57 percent of the take in favor of the green and gold. Even so, the number to beat has jumped a half-point up to -7.5 which lets it be known respected money from sharp bettors like the Niners in this spot. Early O/U reports have the vast majority of bets and a decent chunk of money on the under. Because of it, the total has jumped up a half-point to 45.

One can only sit back and wonder what would’ve happened had Pete Carroll not more or less waived the white flag in the closing moments of Sunday’s division round battle at Lambeau Field. Did he really think he’d get the ball back from Aaron Rodgers with his defense simply unable to get off the field on third down all game long? Punting the ball away still makes me sick! The Packers ultimately moved the chains to salt the game away and hold on for the 28-23 win and cover as 4.5-point favorites. Davante Adams stole the show with his 8 receptions that were turned into 160 yards and 2 TD, but he needed to be on point as easily Russell Wilson carved the defense up throughout the second half. No. 17 might have to be even better this Sunday should the Niners shut Aaron Jones down the way they did Dalvin Cook last Saturday.

The 49ers currently sit only behind the Kansas City Chiefs as the decided favorites of the four remaining teams to hoist the Lombardi Trophy; and for good reason. San Francisco looked all the part of a Super Bowl champion last week in disposing of Minnesota with surgeon-like precision. Though the Vikings answered the Niners beautifully orchestrated opening drive that went for a touchdown with a score of their own, it marked the only time over the course of the game that the visitors actually competed on a level playing field. Kyle Shanahan tilted it dramatically in his direction by leaning on his ground attack in the second quarter, and it paid off handsomely with the first of what would be two Tevin Coleman touchdowns. As dominant the defense was paired with the rushing attack milking every second off the clock, Jimmy Garoppolo wasn’t asked to do much of anything. He only threw 19 passes and completed 11 of them for 131 yards and a 1:1 TD/INT ratio. With Green Bay’s pass defense middle of the road, look for No. 10 to be more involved on Sunday.

Who is going to step up for the Packers on Sunday to allow it to eat into the 29-point deficit absorbed in the regular season showdown with the Niners? Jones and Jamal Williams were nothing short of afterthoughts in the first go round. Brian Bulaga just suffered a concussion against the Seahawks and it’s undetermined as to if he’ll be ready to go on Sunday. That bodes terribly for Rodgers – and the running game - with No. 75 one of his best pass protectors. Adams was limited to 43 yards and a touchdown that was scored late in the third quarter with San Francisco already up 23-0. You can bet your bottom dollar Richard Sherman and company make it a point to stymy him once again! It’s a travesty that Green Bay is in this position. The Packers are frauds that were nearly exposed by another fraud last weekend. San Francisco has been the most complete team in the NFC since day one. Injuries saw it struggle a bit here and there, but the squad has all of its pertinent parts back and looks locked and loaded. The fact that they pantsed the Packers when not at full strength already this season leads me to believe another butt whoopin’ is in the cards on Sunday – lay the chalk!